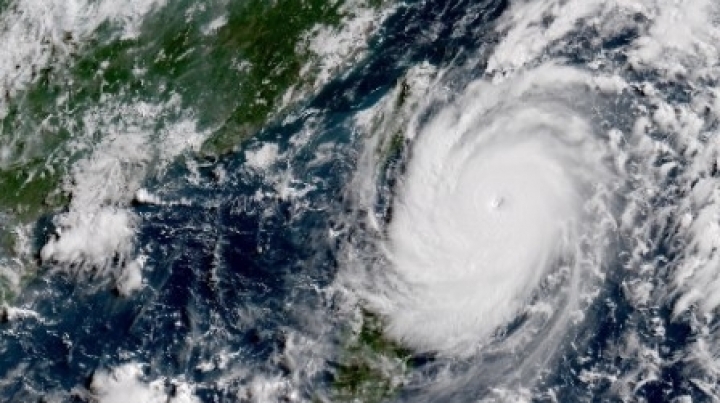 Super typhoon Nepartak slammed into the east coast of Taiwan on Friday morning, overturning cars, forcing thousands from their homes and leaving a trail of destruction in its wake, reports The Guardian.

Taiwan’s first major tropical storm of the season made landfall at about 5.50am in the eastern county of Taitung with winds of 234km/h reportedly lashing the region.

Taiwan’s Central News Agency said at least 69 people were injured after the typhoon struck, most suffering injuries to their heads or limbs caused by falling glass. One woman was reported to be in a critical condition.

The island’s central weather bureau said it expected the storm to linger over Taiwan for up to eight hours and warned citizens to prepare for heavy downpours.

At least one person was reported to have drowned on Thursday as rains hit the area before the typhoon’s arrival. Li Wei-sen, the spokesperson for Taiwan’s central emergency operations centre, told Associated Press 66 people had been injured by Friday morning while 270,000 homes had no electricity.

“The wind is very strong,” one Taitung resident, who gave her name only as Cheng, told Reuters. “Many hut roofs and signs on the street have been blown off.”

The storm system spans 200km and is moving north-west at a speed of 17km/h, towards mainland China, where it is expected to make landfall on Saturday morning.

The storm is expected to dump torrential rain across Taiwan, with mountainous areas forecast to receive up to 500mm, potentially triggering landslides that have in the past claimed hundreds of lives.

More than 35,000 soldiers have been put on standby to help with evacuations and disaster relief, while 90 shelters have been set up.

On Thursday, most domestic flights were grounded and international flights were affected, Taipei’s two main airports said. Offices and schools were closed.

The popular tourist spots of Green Island and Orchid Island, which have evacuated thousands of visitors in the past few days, announced the closure of all schools and offices on Thursday.

China’s eastern Fujian province is bracing for Nepartak, with the storm expected to arrive on Saturday. Authorities have cancelled trains and ordered boats back into port in anticipation of the storm, which will likely exacerbate recent flooding along the Yangtze River and its tributaries.

In China’s north-western Xinjiang region, at least 35 have been killed in a landslide caused by heavy rain, state media reported on Thursday.

The landslide hit a village in the Kunlun mountains, burying houses and their occupants in the early hours of Wednesday.

By Thursday night 35 bodied had been pulled from the debris, according to the official Xinhua news agency.

A rescue operation was underway, but efforts were being hindered by the heavy rain which had damaged local roads.

Floods have caused a series of landslides across eastern China and killed at least 160 people, while more than 1.84 million people have been evacuated, according to Xinhua. More than 56,000 homes have been completely levelled in the region around the Yangtze river in recent days.

As China braced for the arrival of super typhoon Nepartak, a senior Communist party official warned that the country “should be on high alert for river floods and disasters including mountain torrents and landslides”.

Zhang Tao, a weather forecaster from China’s national meteorological centre, said the typhoon would “further aggravate” flooding around the Taihu lake in eastern China taking it to a “dangerous level”.

“The typhoon is very strong. It’s moving fast,” Gao Shuangzhu, another Chinese weather forecaster, told the China Daily in an article warning of the dangers of the arrival of the “monster typhoon”.