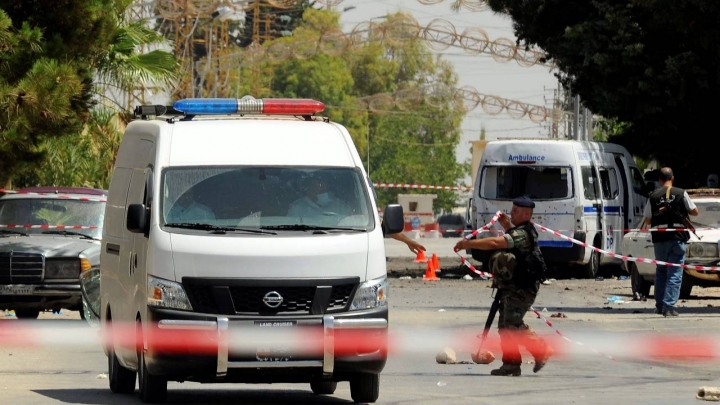 A group of suicide bombers detonated their explosives in a northeastern Lebanese village near the border with Syria on Monday, killing five people and wounding at least 15, a Lebanese military official and paramedics said.

The National News Agency said the blasts occurred in the predominantly Christian village of Qaa, only few hundred meters away from the border. It said four suicide bombers were involved in the rare multiple attack.

According to Wall Street Journal, no group immediately claimed responsibility for the attack.

The villagers became suspicious of the men as they were passing through the village around 4 a.m. local time, an eyewitness in Qaa said. When civilian security men who guard the village called out to them, they threw a hand grenade before successively blowing themselves up among civilians.

A Lebanese military official, who spoke on condition of anonymity in line with regulations, said one suicide attacker blew himself up in front of one of the homes, while three other attackers followed, detonating their suicide vests one after the other as people gathered in the area.

Four members of the military were among the wounded, the official added. An investigation is under way.

Qaa’s mayor, Bashir Matar, described in an interview with the Beirut-based pan Arab channel Al-Mayadeen how the fourth attacker was gunned down.

Matar said it was unclear what had trigged the first explosion but once people started gathering, another explosion occurred followed by a third one.

“As we were treating some of the wounded, I saw the fourth suicide attacker coming toward me. I shouted at him,” Matar said. “We opened fire toward him and he blew up.”

Lebanon has in recent years faced deadly spillovers from the Syrian civil war next door, and Lebanese authorities have been on high alert, tightening security in recent days.

George Kitane, the head of paramedics at the Lebanese Red Cross, confirmed the death toll and said the 15 wounded were rushed to hospitals in nearby areas. He added that several others were treated on the spot.

One of the four explosions struck an ambulance for the village’s archbishopric, killing its driver, residents said.

Though it wasn’t immediately clear who or what the attackers planned to target, the Lebanese Christians of Qaa have taken up arms, setting up self-defense units to protect against potential attack by Muslim extremists from neighboring Syria.

The explosions occurred about 150 meters away from a Lebanese customs border point. The eyewitnesses spoke on condition of anonymity for fears for his safety.

Lebanon’s Al-Manar TV, which is owned by the militant group Hezbollah, said six people were killed and blamed the attack on the Islamic State group.

Hezbollah has been fighting in Syria alongside President Bashar al-Assad’s forces in the Syrian civil war, which has stoked sectarian tensions in Lebanon. Previous attacks in Lebanon have been claimed by the IS group.

The Islamic State group and al Qaeda’s branch in Syria known as the Nusra Front have claimed responsibility for deadly attacks in Lebanon over the past three years that killed and wounded scores of people.

The area of Mashrea Qaa—a predominantly Sunni area that is near village of Qaa—is home to a large number of Syrian refugees who have fled the war in Syria. Qaa is located about 70 kilometers north of the eastern Lebanese city of Baalbek.