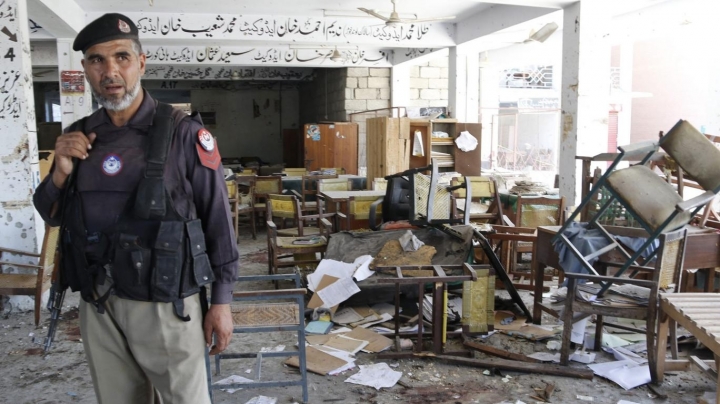 At least 23 people have been killed in a suicide bomb attack on a mosque in north-western Pakistan, reports BBC.

The attack targeted worshippers during Friday prayers in a remote village in the Mohmand Agency, north of Peshawar.

More than 40 people were wounded, many of them children.

Reports say a faction of the Pakistani Taliban, Jamaat-ul-Ahrar, carried out the attack which apparently targeted elders from a government-sponsored anti-Taliban militia.

Pakistan's tribal areas have been subjected to recent attacks by both the Pakistani Taliban and so-called Islamic State.

The Pakistani military began operations there in 2014 to reduce the strength of the Taliban but violence has continued.

About 200 people had congregated for Friday prayers in the village mosque in Ambar region when the explosion occurred, the BBC's Ilyas Khan reports.

Some reports said the attacker had shouted "Allahu Akbar" (God is great).

Prime Minister Nawaz Sharif condemned the attack in a statement released by his office.

Jamaat-ul-Ahrar (The Party of Freedom Fighters) split from the Pakistani Taliban two years ago.

It has claimed a number of major attacks, including a suicide bombing that killed more than 70 people - including many children - at a park during Easter celebrations this year.

In August, the group said it had carried out a suicide bombing that killed at least 70 people at a hospital in the city of Quetta.