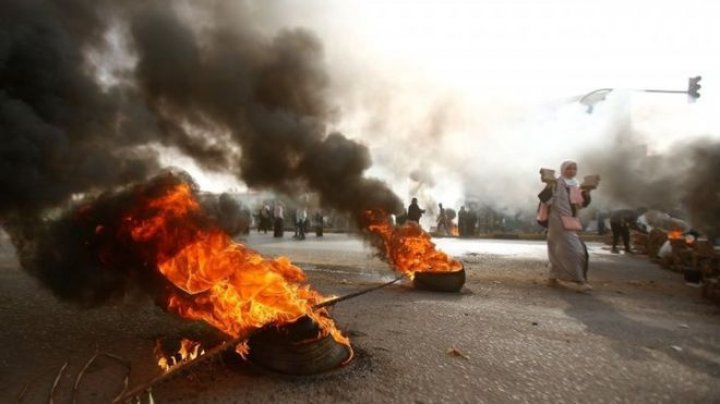 Sudanese security forces have attacked a pro-democracy protest outside the military headquarters in the capital, Khartoum, activists say.

Gunfire has been heard, and medical sources say at least 13 people were killed and dozens others injured, writes BBC.

Sudan has been governed by a Transitional Military Council (TMC) since President Omar al-Bashir was overthrown in a coup in April.

The council later denied using force to break up the main protest site.

"Sudanese forces did not disperse the sit-in outside the army headquarters by force, but rather targeted a nearby area which has become a threat to the safety of citizens," TMC spokesman Lt Gen Shams al-Din Kabbashi told UAE-based Sky News Arabia TV channel.

Protesters have been demanding that a civilian government take over the running of the country.

A source inside one of the main hospitals in Khartoum told the BBC they had received at least eight bodies and many others injured.

The Central Committee of Sudanese Doctors, which is close to the protesters, put the death toll at 13 and reported a "large number of critical casualties".

"Now an attempt is taking place to disperse the sit-in," said a statement from the Sudanese Professionals Association, which is spearheading nationwide protests.

The association later said it was suspending all communication with the TMC, calling for a campaign of "sweeping civil disobedience to topple the treacherous and killer military council".

Protesters have been burning tyres and erecting barricades to try to fend off the security forces.

Journalist Benjamin Strick, who specialises in verifying footage on Twitter, has shared dramatic videos from Khartoum, where repeated gunfire could be heard.

Lt Gen Shams al-Din Kabbashi said security forces had moved towards a location near the main protest site, which he said had "long been a hotbed of corruption and negative practices".

"The area has become a major security threat to our citizens... and it also affects the safety of protesters in the sit-in area," the TMC spokesman added.

"We did not disperse the sit-in by force. The tents are still there and the youth are moving there freely."

He said that many protesters "preferred to leave the sit-in".

It was set up to help keep Mr Bashir in power and has its roots in the Darfur conflict in western Sudan, which began in 2003. Then known as the "janjaweed", this militia carried out frequent massacres.

Meanwhile, the US embassy in Sudan said attacks by Sudanese security forces on protesters must stop.

It is back to square one for Sudan's political process. The hardening stances that stalled the talks between the protest groups and the TMC have been further cemented on both sides.

Expect more resolute protests and a possibly even more ruthless crackdown from the men in uniform. It is the latter who are governing right now. What matters is which faction of the security forces has the upper hand in the TMC.

The hardliners, particularly the Rapid Support Forces - led by the deputy head of the regime, Mohamed "Hemeti" Hamdan Dagalo - appear to be leading the way and could display more ruthlessness than has been seen so far.

There has been a total lockdown in Khartoum, indicating something has shifted within the regime. "People power" is taking a big hit, but protesters could be willing to take greater risks to force the military's hand, if possible.