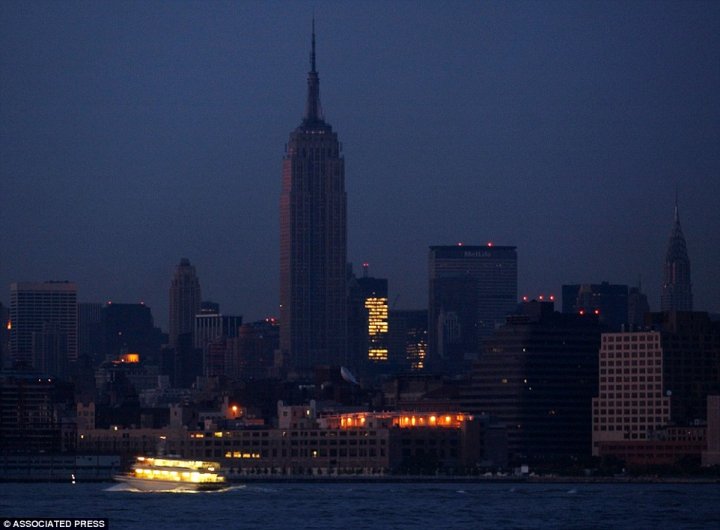 Stunning images have emerged showing New York City being plunged into complete, almost pitch-black darkness during the 2003 blackout that affected the Northeast United States and parts of Canada, writes dailymail.co.uk.

It was a regular mid-August day 15 years ago and the temperature outside in New York City was hovering around 90 degrees.

As is usually the case during the summertime, electricity usage was above average as 20 million customers in New York State kept themselves cool indoors.

But just after 4pm, everything changed.

Just before people started to head home for the rush hour commute, 21 power plants shut down within a span of three minutes.

Just like that, between 50 and 60 million people in New York, Cleveland, Detroit, Toronto, and Ottawa were without electricity.

The power companies did manage to get their grids back online in a few places, but a blackout persisted in New York City for more than a day.

The chaos that ensued was on a scale of epic proportions.

Passengers were stranded in New York City subways for up to two hours while emergency crews worked to get them out - often in the middle of tunnels or between stops.

In many areas, electric water pumps shut down, thus denying water service to residents and businesses.

Some amusement park riders were stranded in the middle of a roller coaster.

‘In less than five seconds we went from normal operations to most of the state blacked out,’ the head of New York State’s electricity grid, Rick Gonzales, said.

‘Alarms were ringing and our computers started flashing red. We didn’t know if we were getting bad information or if this was a true blackout.’

They soon found out. The Northeast blackout of August 14, 2003, was the biggest in North American history, and laid bare the vulnerabilities of an aging electric grid in the most populous region of the United States.

More than 50 million people from Ohio to Ontario would lose power, at an estimated cost of almost $10billion.

Coming just two years after September 11, the blackout reignited fears of what a targeted attack could achieve if, as an official report eventually concluded, a few untrimmed tree branches in Ohio could do that much damage.

To help speed the recovery, the grid operator relied on just ‘one guy in a truck’ navigating his way through congested traffic to reconnect the state to the wider grid at a substation just north of the New Jersey border, where they still had power.

New York utilities restored power to about two-thirds of homes and businesses by 8 a.m. Eastern time Friday, about 16 hours after the blackout started.

Service was completely back after about 30 hours.

Electricity experts say a similar event is far less likely to happen in the U.S. Northeast.

Grids and power companies have overhauled their operations, and regulators now have the authority to punish any company that doesn’t adhere to rules covering everything from maintenance schedules to how close tree branches can get to power lines.