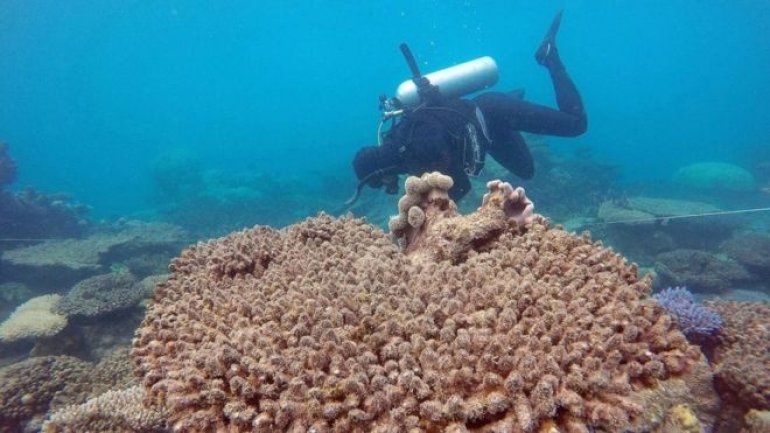 Higher water temperatures in 2016 caused the worst destruction of corals ever recorded on Australia's Great Barrier Reef, a study has found, according to BBC.

Some 67% of corals died in the reef's worst-hit northern section, the ARC Centre of Excellence for Coral Reef Studies report said.

The situation was better in the central section, where 6% perished, while the southern reef is in good health.

But scientists warn recovery could be difficult if climate change continues.

Coral bleaching happens when water temperatures rise for a sustained period of time.

In February, March and April, sea surface temperatures across the Great Barrier Reef were the hottest on record, at least 1C higher than the monthly average.

"Some of the initial mortality was down to heat stress," said study leader Professor Terry Hughes.

"The coral was cooked."

Far more has been lost through gradual starvation, after the coral expelled the colorful algae zooxanthella, which turns sunlight into food.

This is what leads to the white, skeletal appearance of the coral, which is left without its main source of energy.

The study also found that the coral which survived the bleaching have now come under greater threat from predators such as snails and crown of thorns starfish.

This year's mass bleaching was the worst-ever recorded on the Great Barrier Reef, following two previous events in 1998 and 2002.

Professor Hughes is certain that the increased water temperature is the result of carbon emissions, and warns that climate change could bring annual bleaching within 20 years.

One of the worst-hit areas is around Lizard Island in Far North Queensland, where around 90% of the coral has died.

Lizard Island is home to a research station, where scientists from across the world have come for decades to study marine life.

One of its directors, Dr Anne Hogget, said this was by far the worst event to hit the Great Barrier Reef since she started working there in 1990.

"We had bleaching here in 2002," she said. "We thought this was bad at the time, but this has blown it completely out of the water."

She is hopeful that the reef is capable of recovery, but fears it may not be give an opportunity, as sea temperatures continue to rise.

On the central and southern parts of the Great Barrier Reef, where bleaching was not as prevalent, there is concern that it has been misreported, with one magazine even publishing an obituary of the reef earlier this year.

The Australian Government has published a long-term sustainability plan for the reef, and pledged financial support for research into coral bleaching.

The 2050 plan identifies the need to help make the reef more resilient to climate change in the future, while trying to lower carbon emissions.