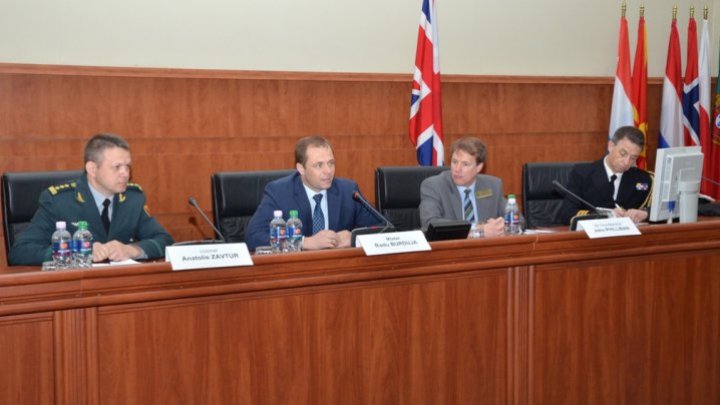 A group of students of the Royal College of Defense Studies in the UK has made a documentary visit today to the Defense Ministry.

The 18 civilians and military experts met with representatives of the Ministry of Defense and the National Army Corps and discussed the security and stability perspectives of the Republic of Moldova, the main threats, risks and vulnerabilities at regional level and the existing cooperation framework between the Ministry of Defense and the Kingdom of Great Britain and Northern Ireland.

Secretary General Radu Burduja welcomed the interest of the students in the defense and security sector in our country, mentioning that for the Ministry of Defense such events means a possibility to inform international partners about the latest initiatives and reforms in the field.

Head of the Strategic Planning Directorate of the General Staff, Colonel Anatoly Zavtur, presented the mission and role of the National Army and the main actions of the military-oriented institution to international students.

Colonel Zavtur referred to the updating of the strategic legal framework - the development of the National Defense Strategy and the Military Strategy, the projects implemented with the support of international organizations - the UN, OSCE, NATO and the EU.

Colonel Zavtur also informed experts that the National Army had participated in missions and peacekeeping operations and military co-operation with the United Kingdom of Great Britain and Northern Ireland.

18 students of the Royal College for Defense Studies in the United Kingdom are on a study trip to the Republic of Moldova from 13-19 May.
AFLĂ imediat Știrile Publika.MD. Intră pe Telegram