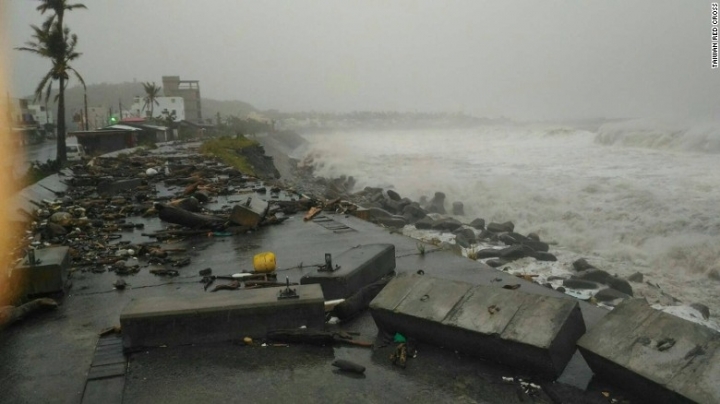 Hundreds of people have been evacuated in southern Taiwan and China has issued a red alert as the region braces for the impact of the strongest storm of the year, reports CNN.

Super Typhoon Meranti is barreling down on Taiwan, bringing wind speeds of up to 370 kph, faster than a Formula One race car, and torrential rains.

Schools and offices across the south of the island have closed and dozens of flights have been canceled, according to the official China News Agency.

So dangerous outside now in #Kaohsiung, stay inside people! #Meranti pic.twitter.com/JB3xiHMXJA

Two people have been injured, and more than 260,000 households have lost power in counties across southern Taiwan, according to Taiwan authorities.

More than 370 domestic and international flights have been canceled and train services have also been suspended.

As of 7 a.m. local time Wednesday morning, around 1,500 people had been evacuated from the affected areas, Li Wei-sen, of the Taiwan Central Emergency Operating Center, told CNN.

Almost 4,000 military and police personnel have been deployed to the region to prepare for potential future evacuations, but he said authorities are not expecting major damage or destruction.

While the 23 million people in Taiwan are likely to be buffeted and soaked by Meranti, the main brunt of the storm will fall on mainland China. The storm is expected to make landfall in Guangdong or Fujian provinces during the day on Thursday.

Authorities in six south-eastern provinces as well as Shanghai have initiated emergency response measures as the storm approaches, according to state run news agency Xinhua.

If the storm makes landfall in eastern Guangdong, it could be the strongest to hit the province in 47 years, Xinhua reported.

"It only took nine hours for Meranti to grow into a super typhoon from a typhoon," Guangdong meteorologist Zhang Dong told the news agency. "Packing winds between 202 to 220 kilometers per hour, it is interacting with another storm, Malakas, 1,000 kilometers away, and the route could be hard to predict."

China's National Meteorological Center issued a red typhoon warning at 6 a.m. local time Wednesday, while authorities warned that waves eight to 13 meters high could be expected in the northeastern part of the South China Sea.

After a period of rapid intensification Monday and Tuesday, which saw Meranti grow from a Category 1 equivalent storm to that of a top-scale Category 5 in only 24 hours, the super typhoon has maintained winds of 305 kph for nearly 24 hours.

With current gusts of up to 370 kph, Meranti is the strongest typhoon since Super Typhoon Haiyan devastated the Philippines in 2013 and is the strongest storm to come this close to Taiwan since 1959.