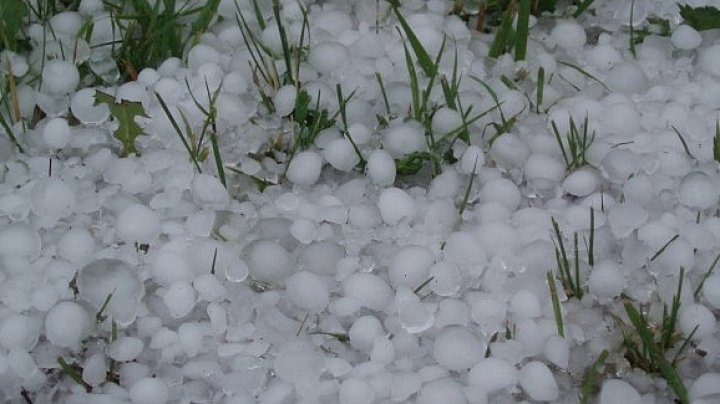 Sleet and strong wind caused chaos in multiple localities from the country. Most damaged was Căuşeni district, where dozens of hectares were destroyed, while three cattle were killed after stepping on a fallen electric cable. People from Chircăieşti village, were horrified when the calamity begun.

People retell that, at one point, the sleet begun simply pouring.

"Plain ice was falling from the sky. There was no water, only ice."

"It rained with big chunks of ice. It ruined my grapes and trees."

"It was horrifying. The ice covered the whole street. It ruined our garden."

A farmer claims that despite the sleet lasted only a few minutes, it managed to destroy 70% of his grape plantation.

"The sprouts were torn. I am not sure if they will manage to recover. After the rain I do not even wish to come near them" farmer Alexandru Buga said.

The sleet also ruined the gardens of villagers. A woman claims that it wasted her work from the past five months: "I planted and took care of the crops and now they are all gone. There is nothing we can do about it. 5 minutes was more than enough to cause such damage."

Strong wind has also ruined the roofs of some houses.

The sleet has also caused damages to the roads from the village, that were repaired before Easter. Local authorities now require 20 000 lei to remove the consequences.

"After this devastating sleet, many roads were damaged. They all require repair works." Mayor of Chircăieşti village, Galina Ceban said.

Authorities have not yet estimated the total damages caused by the storm.