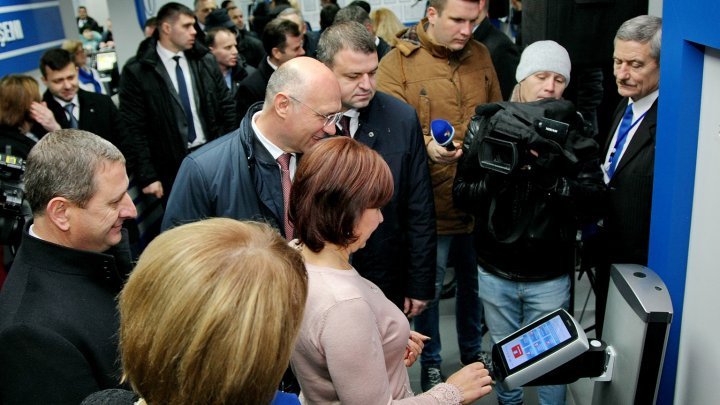 More than 13 000 people have completed their papers at the Multifunctional Center in Straseni. The unique counter was launched in December, and since then, people benefit of about one thousand public services in one institution.

The director of the Public Services Agency, Sergiu Railean, visited the center and asked local people if they are satisfied with the service.

"It's a good thing that everything is all in one place."

"They were coming in the night and waiting for the turn to come up with an ID or something, here's a lot more normal."

Agrepina Avram, a 80-year-old woman from Lozova village who came to complete her passport. The retiree was amazed by the new technologies.

- Do you think I do not see anything?
- Here's where you're comfortable.
- God forbid.

The employees say it's easier now. Every day, up to 260 people are served here.

"The most requested are the civil status services, the documentary service of the population and the cadastral service. Every service does its job and we have results," said Emilia Trofimov, head of the Straseni Multifunctional Center.

More than 28,000 services have been provided since the opening.

"We also conducted a survey with special terminals and showed us that more than 90% of the citizens who served in this center were satisfied with the services rendered," said Sergiu Railean, director of the Services Agency public.

The Multifunctional Center in Straseni is the first to be launched in Moldova. The inmates will be opened in Cahul, Comrat and Ocnita. The Public Services Agency was created by the Government at the end of April 2017. The new structure took over the attributions of the State Registration Chamber, the Licensing Chamber, the State Enterprise "Cadastre" and the Civil Status Service.
AFLĂ imediat Știrile Publika.MD. Intră pe Telegram