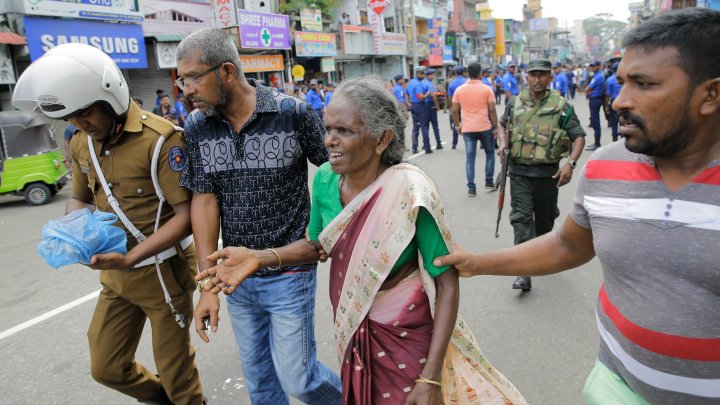 COLOMBO, Sri Lanka — A series of coordinated bombings ripped across Sri Lanka on Sunday morning, striking hotels and churches, killing almost 200 people and shattering the relative calm that the war-torn nation had enjoyed in recent years, according to www.nytimes.com.

The targets of the attacks were Catholic worshipers attending Easter Mass and guests at high-end hotels that are popular with foreign tourists.

The deadliest of the explosions, which began around 8:45 a.m., appeared to be at St. Sebastian’s Church in Negombo, a city about 20 miles north of Colombo, the capital. Pictures posted on social media showed blood and rubble as members of the congregation tended to wounded people strewn across pews.

The other churches attacked were St. Anthony’s Shrine in Colombo and Zion Church in the eastern city of Batticaloa.

At St. Anthony’s, black smoke billowed out from the front doors and witnesses said many people had died inside.

“It was a river of blood,” said N. A. Sumanapala, a shopkeeper near the church who said he had run inside to help. “The priest came out and he was covered in blood.”

There were also explosions at three hotels in Colombo: the Shangri-La, the Cinnamon Grand and the Kingsbury.

Dr. Samiddhi Samarakoon, a deputy director of the National Hospital of Sri Lanka, said Sunday afternoon that the death toll had risen to 189. Eleven foreigners are among the dead, she said.

Sri Lanka, an island nation in the Indian Ocean, suffered decades of civil war that ended in 2009. Since then, there has been some political instability and sporadic attacks, but nothing on this scale.

Though it was not immediately clear who was responsible for the attacks, the police said they appeared to have been coordinated. A senior presidential aide said early investigations suggested that the attacks had been carried out by suicide bombers.

With President Maithripala Sirisena away on an overseas trip, Prime Minister Ranil Wickremesinghe was running the government’s emergency meetings.

“Please avoid propagating unverified reports and speculation,” he said in a Twitter post. “The government is taking immediate steps to contain this situation.”

As ambulance sirens wailed across several different cities on Sunday, pews at the targeted churches lay in splinters. Soldiers shut down roads and internet transmission slowed dramatically, possibly a government effort to stop the spread of fake news. Hundreds of people rushed to donate blood after a public appeal.

The panic of the blasts quickly spread to other churches, which halted or canceled their Easter services.

“Our phones were on silent, but one guy got a text about the bomb blast,” said Ranil Thilkaratne, who was at a service in the Colombo suburb of Nugegoda. “Then he alerted the priest. We stopped the service and moved out.”