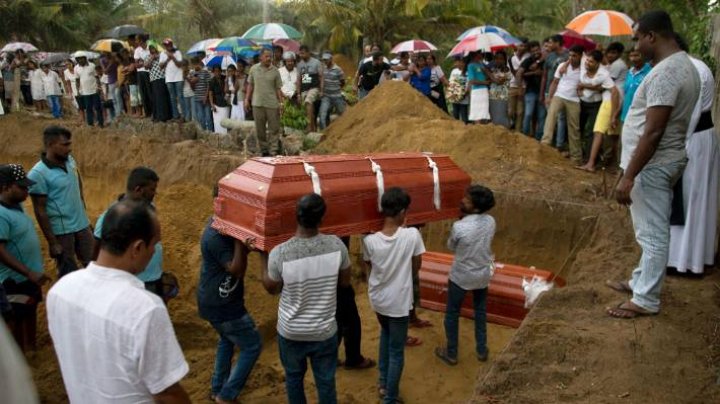 Sri Lankans have started to bury the dead from Easter Sunday’s string of bombings that killed at least 321 people, writes theguardian.com.

Tuesday has been declared a national day of mourning and white flags were hung from buildings across Colombo as a three-minute silence was held from 8.30am, about the time of the first of Sunday’s bombings that targeted three churches and three luxury hotels.

At Sebastian’s church in Negombo, where at least 110 people are thought to have been killed, more than 20 coffins were brought in for individual services in the run-up to a mass memorial beginning mid-morning. “There are so many bodies that we can’t accommodate them all at once,” Anthony Jayakody, the auxiliary bishop of Colombo, told AFP.

A few hundred metres away, a palm-lined lot donated to the church had been turned into a mass burial site, where 22 bodies had been laid out by 1pm local time. They were marked out by flower arrangements and numbered wooden crosses. “They have died in one place and our hierarchy has decided to bury them in one place,” said Father Sanjeev Senananya, standing by the site.

The small, majority-Catholic city was awash with clerics and mourners dressed in white, who walked past rows of leaflets pasted on the walls commemorating victims. The narrow lanes that criss-crossed the area were watched by security forces in camouflage uniforms carrying rifles. “Every second house is having a funeral today,” said a local schoolteacher who said his name was Amantha.

Flags were lowered to half-mast on government buildings, and people bowed their heads but tensions remained high. Bomb disposal squads were called to Kollupitiya railway station in Colombo after an unattended package was found on a train. The US embassy urged people to steer clear of the area before the all-clear was given.

A state of emergency has been introduced and 40 arrests made, with the second overnight curfew lifting at 4am. Parliament is due to convene on Tuesday, with an announcement expected from the prime minister, Ranil Wickremesinghe.

Investigators were hunting for clues on whether a local Islamist group named as the chief suspect in the attacks – National Thowheeth Jama’ath – received “international support”, said the cabinet minister and government spokesman Rajitha Senaratne.

National Thowheeth Jama’ath is a newly formed group in Sri Lankacommitted to a militant and intolerant Islamist ideology. But though it is known for being a virulently anti-Buddhist and has been linked to the vandalisation of Buddhist statues, it has not previously been linked to terrorism. Four of its members were arrested in January.

Experts say it is unlikely the organisation would have been able to rapidly develop the capability to perpetrate a complex attack involving multiple suicide bombings without very significant outside assistance. Senaratne himself said it was not possible for such “a small organisation” to carry out such well-coordinated suicide strikes.

As security forces continued combing Colombo for any more explosives, focus was shifting to the role that infighting within the government may have played in allowing Sunday’s attacks to occur.

An intelligence note detailing the names, targets and whereabouts of possible attackers was circulated in parts of the government but is understood not to have reached the cabinet nor the prime minister. It is unclear whether the country’s security council also considered the warnings.

Sri Lanka’s government has been divided into factions since a constitutional crisis late last year, when the prime minister and his allies stopped being invited to meetings of the country’s top security officials.

On Tuesday at St Anthony’s Shrine in Colombo – where scores died as they gathered for Easter Sunday prayers – a crowd of a few dozen people held candles and prayed silently, palms pressed together.

Some struggled to hold back tears and as the three minutes drew to a close, the crowd began to chant prayers.

The attacks were the worst against the country’s small Christian minority, who make up 7% of its population of 21 million. It is the worst atrocity since Sri Lanka’s civil war ended a decade ago.

President Maithripala Sirisena’s office said there was intelligence that “international terror groups” were “behind local terrorists” and that he would seek foreign help to investigate.

The state of emergency, which gave police and the military special powers to counter militant strikes, came into force at midnight. Suspects can be detained without a court order.

Tensions remained high and security heavy after a bomb discovered by police on Monday near one of the targeted churches blew up before police could defuse it. Although there was a powerful blast, no injuries were reported.

Details have begun to emerge about some of the foreigners killed in the blasts. The US reported at least four Americans killed – including a child – and the Netherlands raised its death toll to three.

The Danish billionaire behind the Asos fashion website lost three of his children in the attacks, a spokesman for his company said.

The vast majority of the dead are thought to have been Sri Lankan.

The suicide bombers hit three Colombo luxury hotels popular with foreign tourists – the Cinnamon Grand, the Shangri-La and the Kingsbury – and three churches: two in the Colombo region and one in the eastern city of Batticaloa.

Interpol said it was deploying investigators and specialists to Sri Lanka, and the US state department warned of possible further attacks in a travel advisory.

Ethnic and religious violence has plagued Sri Lanka for decades, with a 37-year conflict with Tamil rebels followed by an upswing in recent years in clashes between the Buddhist majority and Muslims.