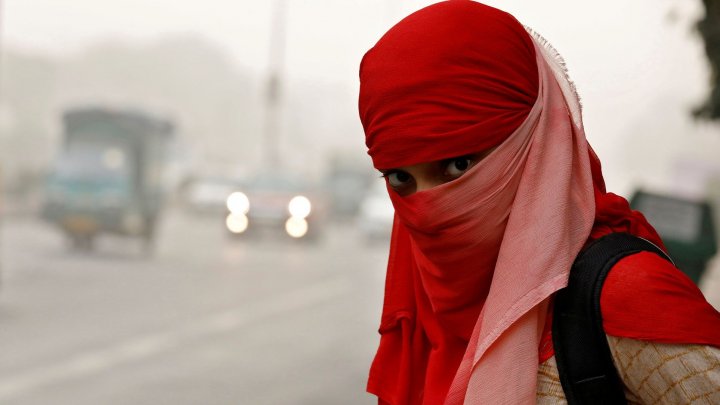 President Maithripala Sirisena said he was using an emergency law to impose the restriction from Monday.

Any face garment which "hinders identification" will be banned to ensure security, his office said. Muslim leaders criticised the move.

The niqab and burka - worn by Muslim women - were not specifically named.

The move is perceived as targeting the garments, however.

Dozens of suspects have been arrested, but local officials have warned that more militants remain at large.

Sri Lanka has a sizeable and centuries-old Muslim population - out of 21 million, just under 10% are Muslim.

Only a small number of women are thought to wear the face-covering niqab, or the burka - a one-piece garment that covers the face and body.

Last week a Sri Lankan MP had proposed a ban on women wearing the burka, saying it should be outlawed on security grounds.

The All Ceylon Jamiyyathul Ulama, an organisation of Muslim clerics in Sri Lanka, was highly critical of the president's decision.

"It is the stupidest thing to do. Three days ago we took a voluntary decision regarding this. The All Ceylon Jamiyyathul Ulema told all Muslim women not to wear face veils for security reasons. If they wanted to wear a veil, then they were told not to come out," Hilmy Ahmed, the group's vice-president, told the BBC.

"We see this as a reflection of the conflict between the president and the prime minister. We strongly criticise the decision. We will not accept the authorities interfering with the religion without consulting the religious leadership."

Over the weekend thousands of Sri Lankan troops stood guard on the streets, protecting churches and mosques.

Sunday church services were cancelled across the country as a precaution, but worshippers in the capital gathered to pray outside St Anthony's Shrine, which was badly damaged in the attacks.

The number of people arrested in connection with the bloodshed rose to 150. Authorities are also hunting for around 140 followers of the jihadist group Islamic State, which has said it was involved in the bombings, but has not given details.

On Friday, security forces raided a safe house used by the Islamist group NTJ, which authorities have said was behind the attacks. The group was founded by Zahran Hashim, the alleged organiser of the bombings who blew himself up at a hotel in Colombo.

As troops moved in on Friday, three men set off explosives, killing themselves, six children and three women. Three other people died in gunfire.

Hashim's father and two brothers were among those who died in the operation.