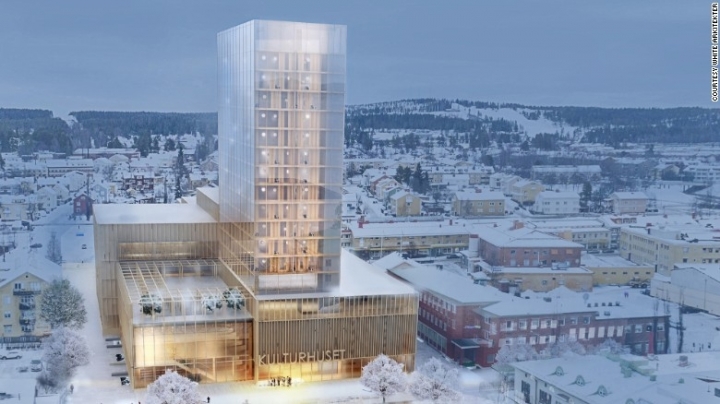 Wood is being billed as the answer to creating greener cities -- lightweight and sustainable, it is even said to be more fire resistant than steel.

An explosion of timber towers, either built or proposed, has gripped the architecture world over the past five years, every one seemingly a recorder holder in some respect.

Last year, the Cube, a 109-feet-high apartment block in London's Shoreditch, became "the tallest cross-laminated timber structure in Europe," according to its developers.

In Canada, work has begun on the descriptively named Tall Wood Building, which will provide student digs at the University of British Columbia.

It's an experiment in pushing the frontiers of building with wood, and is part of a growing movement to build in timber.
The 80-story tower, if given the green light for construction, will be made of timber -- making it London's first wooden skyscraper and the tallest wooden structure in the world.

"There's a whole bunch of new materials made out of wood that are structurally able to build big buildings," says Dr. Michael Ramage, of the Center for Natural Material Innovation at Cambridge University.

Cross-laminated timber, for example, sees thin layers of wood placed across one another at right angles, and laminated with fire-resistant glue to create a stronger weave.

"The great fires of London and Chicago were both sparked by very small pieces of wood. Very big pieces of wood are quite hard to set on fire -- they aren't kindling material."

"People tend to feel relaxed around wooden buildings," says Flanagan. "People associate wood with green spaces, they have an affinity to it. There would be a real benefit to introducing wooden structures to the cities where people live."

In fact, using wood could be more sustainable. Ramage says wood is, on average, four times lighter than concrete, so transporting it uses less energy.

"We know from a very long history of building in wood it can last -- we have 600, 700-year-old buildings in the UK which are fine," says Ramage. "The one constant they have is that they have all been well looked after.", CNN reports.