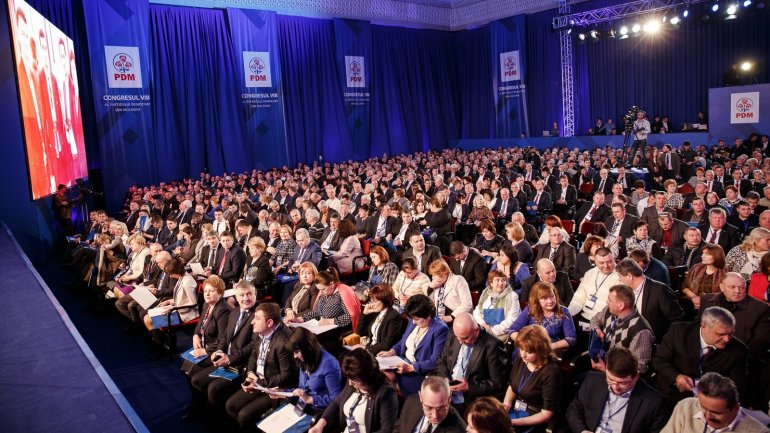 Democratic Party convened today at the eighth congress of the party. The honorary president of the party, Dumitru Diacov, made a speech at the event.

"It is time for the balance to see what we did in these four years. When you are part of a party that is responsible for the things that occur in the country, I am convinced that each of the delegates has a lot to say. You can not be a member of PDM in a country with many problems and to sleep soundly, to wake up and be happy. Our Congress is an important step for all of us. PDM these days has reached 20 years. For 20 years we are in the Moldovan politics.

I want us all to realize what is the Democratic Party, how we thought of it and how we think for him to stay on. There is no country in this world where there are such barricades as in Moldova. Without mobilization is not possible for a country to develop. This mission is the one of the Democratic Party. That should understand each party member, because we can move forward. We are a small country. We can mobilize. But this is a task of the political class in Moldova. But we have a political class that divides the country for votes.

Moldovan citizen wants to be peace in his country. At the state level we need to understand these things. That means the Democratic Party. This is our task. We must be the political exponent of Moldova. We want to have good relations with all neighbors. We want for the next president to be for all people. Because if he will be just for those who voted for him in the country will be instability. We need a national consensus in the name of the future. A national consensus based on the main idea: to live in a sovereign, independent and growing state, which offers future to its citizens. That is our mission.

PDM must inform the population and say that Moldova is a country that can be developed through a joint effort. PDM is the most organized party, which has structures in all localities in Moldova, which has hundreds of mayors, heads of educational, medical institutions. World expects from PDM a development program for the future.

We must assume this responsibility for the economy to work and people to be happy. Fewer statements, less demagoguery and more facts. Because the facts will create a healthy atmosphere in relations with other countries.

We are the only party that has shown that it is able to do steps. We had this responsibility and we thought first about the party. It is a party necessary for Moldova.

Our children and grandchildren should live in a prosperous society" said Dumitru Diacov.