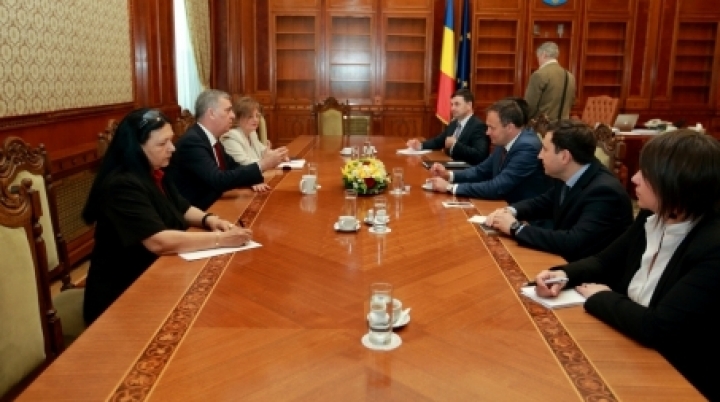 Moldova’s progress in implementing the Association Agreement with the EU, the Moldovan authorities’ reform priorities, the country’s cooperation with the IMF and the regional social and political situation have been tackled today by Parliament speaker Andrian Candu, at meetings with Romania’s Senate head Călin Popescu-Tăriceanu and House speaker Valeriu Ștefan Zgonea.

Andrian Candu has spoken about the Parliament’s priorities till the end of the running session, ending later in July. The refer to the financial-banking sector, justice reform and corruption fight, the bill on the state officials’ integrity, attracting investment in the power sector. The speaker has mentioned the Parliament and Government synchronize their efforts to carry out the commitments in due term.

Candu has specified the importance of cooperating with the International Monetary Fund, whose mission is expected to Chișinău on 5 July to try to strike and agreement.

The Parliament’s chairman has expressed gratitude and appreciation to Romania for the steady support granted to Moldova, mentioning the recent humanitarian aid of EUR3.6 million.

They have also talked about 5+2 for talks (the Transnistrian settlement) and the cooperation with the Gagauz authorities in the south.

The chairman of the Chamber of Deputies, Valeriu Zgonea, has expressed full backing for Moldova’s Association and Trade agreements with the EU, pleading for the steady cooperation among sectorial Committees.