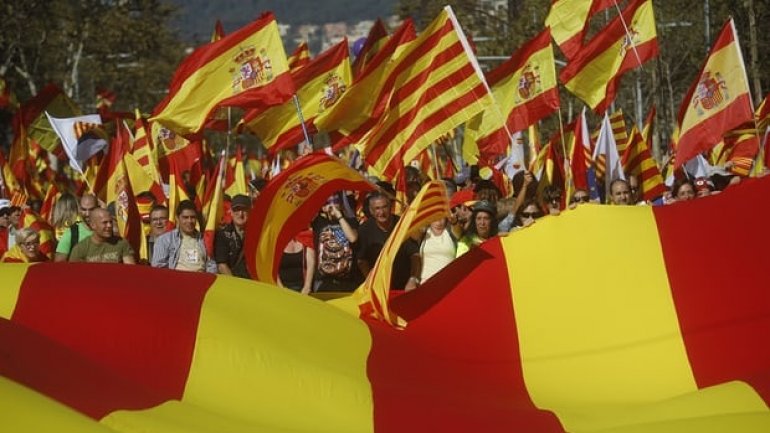 Tens of thousands have gathered in central Barcelona for a large pro-unity demonstration two days after the Catalan parliament voted for independence and the Spanish government took control of the region.

Sunday’s demonstration, which began at 12 noon local time, was called by the anti-independence group Societat Civil Catalana, which organised a similar event earlier this month that was attended by hundreds of thousands of people.

People with Spanish flags tied around their necks headed towards the Passeig de Gràcia, one of Barcelona’s main thoroughfares. Other carried white banners with the flags of Catalonia, Spain and the EU surrounded by a heart.

The event’s slogan was: “We are all Catalonia. Common sense for co-existence!” and the protest was expected to draw people from Catalonia and beyond as well as members of the Spanish government and pro-unity Catalan MPs.

Madrid claimed direct control of Catalonia for the first time in nearly four decades on Saturday, firing the regional government and police chief after a unilateral declaration of independence. But the deposed Catalan leader immediately vowed there would be peaceful resistance to the takeover.

Hours after the Spanish government formally announced his dismissal, and the replacement of his entire cabinet by counterparts hundreds of miles away, the Catalan president, Carles Puigdemont, put on an ostentatious display of normality with lunch at a restaurant in the centre of his home city.

As he toasted friends with red wine, posed for pictures with supporters in Girona and enjoyed the applause of fellow diners, all broadcast live on national TV, a pre-recorded video message went out promising to continue to work “to build a free nation”.

“We must do so resisting repression and threats, without ever abandoning, at any time, civic and peaceful conduct,” he said in the brief statement, adding that his government did not have or want “the argument of force”.

The Catalan republic that was declared on Friday is not legal under current Spanish law. As well as removing Puigdemont’s existing powers, Madrid has dissolved the Catalan parliament that declared independence, and called new elections for 21 December, the earliest possible date.

Spain’s deputy prime minister, Soraya Sáenz de Santamaría – who has managed the government’s response to the Catalan crisis – has been appointed to run Catalonia on a day-to-day basis until then. But the string of government orders published on Saturday morning provide only the outline for Madrid’s takeover. Spanish prime minister Mariano Rajoy now faces the challenge of implementing it.

The region has been officially self-governing since its statute of autonomy was signed in 1979, as Spain returned to democracy following the death of dictator General Francisco Franco in 1975. Many of the thousands of supporters of independence who were weeping and celebrating on the streets of Barcelona and other towns on Friday had pledged peaceful resistance to Madrid’s orders even before Puigdemont’s carefully worded call for resistance.

Activists have offered to form human chains around buildings to protect officials, some of whom are expected to face arrest and possible jail sentences for their role in both the October referendum and the declaration of independence that followed.

Some of the region’s 200,000 civil servants have said they will not accept orders from Madrid, and one Catalan union has also called a 10-day strike starting tomorrow in support of the new republic, although larger groups have not joined them.

Josep Lluís Trapero, head of the regional Mossos d’Esquadra police, who won praise for his response to the August terrorist attacks, has been the only senior official to say he will comply with Madrid, accepting a demotion to commissar.