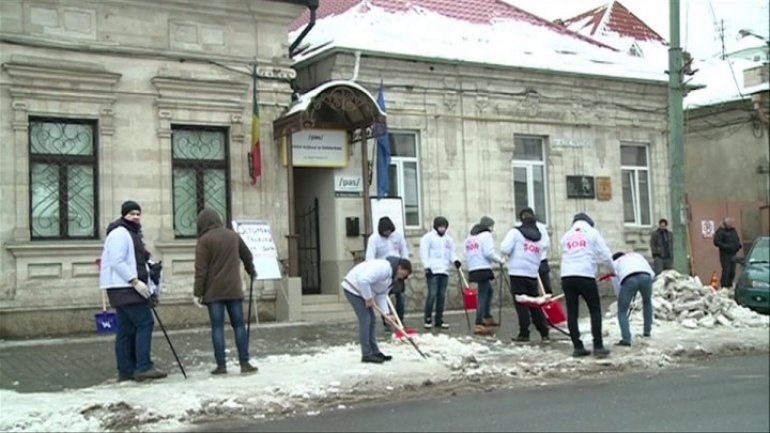 Supporters of Orhei's Mayor, Ilan Şor, decided that leader of Party of Action and Solidarity, Maia Sandu needs to be taught a lesson. After the she was yesterday criticized for not being able to at least take care of her own office, today, Șor's supporters decided to do it for her.

Equipped with shovels, brooms and sand, the young people cleaned up. The action comes after yesterday, Ilan Șor's supporters came to protest and noticed that PAS leader cannot even take care of the building owned by her party, taking into consideration her wish to govern.

"We saw a mess yesterday in front of the office. Our message for Madam Maia Sandu is that before promising to clean up the country, she should at least be able to clean up her headquarters" a citizen said.

"We decided to show her what it means to clean up. Actions speak louder than words" another citizen said.

"We wish to show her how to take care of something in real life, if you cannot care for the city, at least care for your house" another citizen declared.

Yesterday, over 400 supporters of "Șor" party protested at the Party of Action and Solidarity's headquarters. People criticized Maia Sandu, urging her to stop talking and start acting, as Ilan Şor did. At the same time, people have requested the party's leader to stop pressuring the justice.