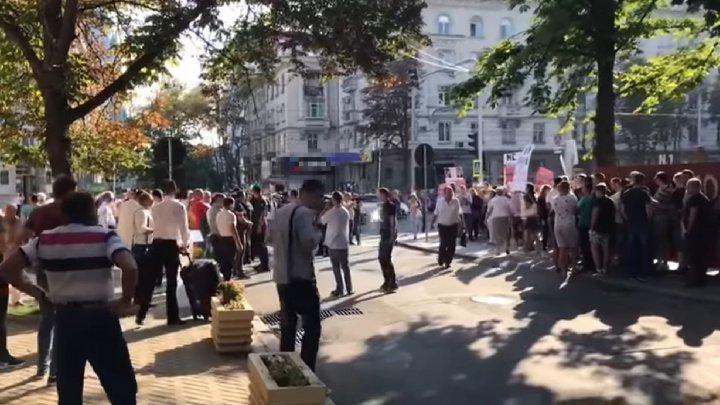 Embarrassment at DA conference organized in front of City Hall this morning. While Năstase was reading his speech, the supporters of the ŞOR party came to event as they disagreed with DA and PAS leaders who threatened to shut down social shops.

Disturbed by the protesters, Andrei Năstase and his supporters shook the supporters of Mayor of Orhei.

The protesters also came with several banners on which photos of opposition leaders were:

"We are against the social shops to be closed. We, the retirees, are living thanks to 2-lei bread, with cheaper things. We are people, they are aggressive and compete with each other".

"Maia Sandu and Andrei Nastase only doing bad things for the country. We'll fight until Moldova activates all social shops".

Our journalists tried to discuss with PPDA supporters but they still had insulting words.

Subsequently, the supporters of ŞOR party went to protest in front of PAS headquarter.

The PAS representatives did not go out to talk with the demonstrators. Maia Sandu did not answer the phone to comment on the accusations.

Recently, Ilan Şor announced that he would hold protests against Maia Sandu and Andrei Nastase.

Şor was unhappy with the fact that the two said social shops were illegal and needed to be closed.