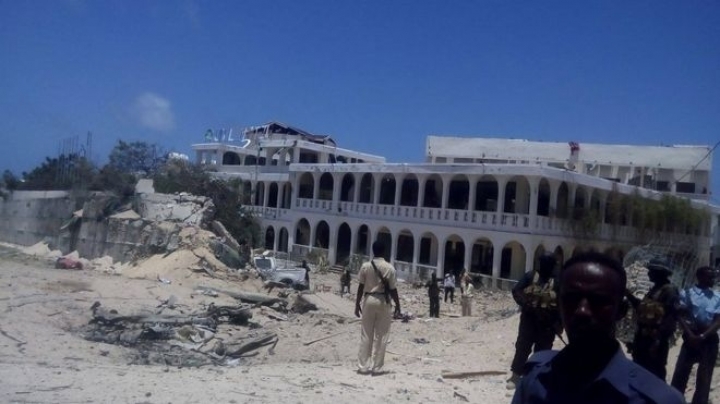 A large car bomb has exploded outside a hotel in Somalia's capital, Mogadishu, in a heavily secured area close to the gates of the presidential palace, reports BBC.

At least five people have been killed and an eyewitness told the BBC he had seen many more with injuries.

The Islamist al-Shabab group, which is affiliated to al-Qaeda, says it is behind the attack.

The Somali Youth League (SYL) Hotel is a popular meeting place for officials and has been targeted before.

Local media report that a security conference was scheduled to take place at the hotel on Tuesday morning.

A number of journalists are reported to be among the injured.

The eyewitness said he did not believe there were gunmen present, contrary to some early reports.

In previous attacks, a bomb at a perimeter fence has been followed by an assault by militants.

Al-Shabab is fighting to oust Somalia's UN-backed government and establish an Islamic state.

It was forced out of Mogadishu five years ago by African Union (AU) and government troops, but has continued to carry out bombings in the city.

The group appears to be stepping up its attacks ahead of planned elections in Somalia, with a president due to be elected by MPs in October.