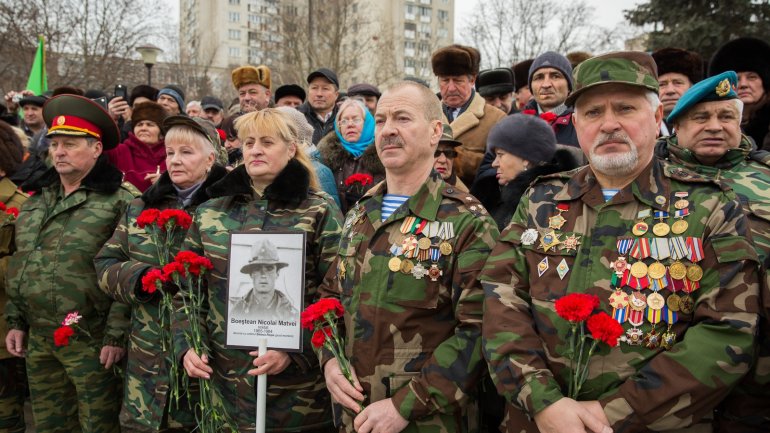 A meeting dedicated to Memorial Day for those who died in the war in Afghanistan was held in Chisinau today, February 15th.

On this occasion, several high ranking officials laid flowers at the memorial venue “Feciorilor Patriei - Sfîntă Amintire” (Holy Memory to Motherland's Sons) , in memory of soldiers who died in the war in Afghanistan.

President Igor Dodon said that an important event was marked in history today. “28 years ago, the Soviet troops withdrew from Afghanistan. Our citizens who participated in this war have done their duty of soldiers, and we are proud of you. You are true heroes and deserve all our respect,” he said.

For his part, Parliament Speaker Andrian Candu noted that the war in Afghanistan represented a tragedy. “In this conflict we have paid a price too expensive, because we lost hundreds of citizens on the battlefield. We firmly say you are real heroes, and the country’s leadership should make every effort that people should not lose blood on the battlefield, and mothers should not cry after the lost sons” , he said.

At the same time, Prime Minister Pavel Filip said that the authorities would do their best to prevent any armed conflict and offer stability in the country. “Today we mention those who have not returned home from this war, and thank you heroes for being with us. There are many controversial discussions about this conflict, but it is important you have given us a lesson in bravery, honor and respect. We are obliged to remember your actions and take care of veterans, as they lead a better life” , he said.

Under a government decision, on the occasion of commemorating those killed in the war in Afghanistan, the participants in the war are to be provided with state distinctions, and disabled people and families of those died will receive one-off assistance. Also, several memorial plaques will be installed in some educational institutions in the country, as well as patriotic educational decades will be organized.

About 12,000 Moldovans have participated in the war in Afghanistan (1979-1989), of whom around 300 died on the battlefield and 700 were injured.
AFLĂ imediat Știrile Publika.MD. Intră pe Telegram