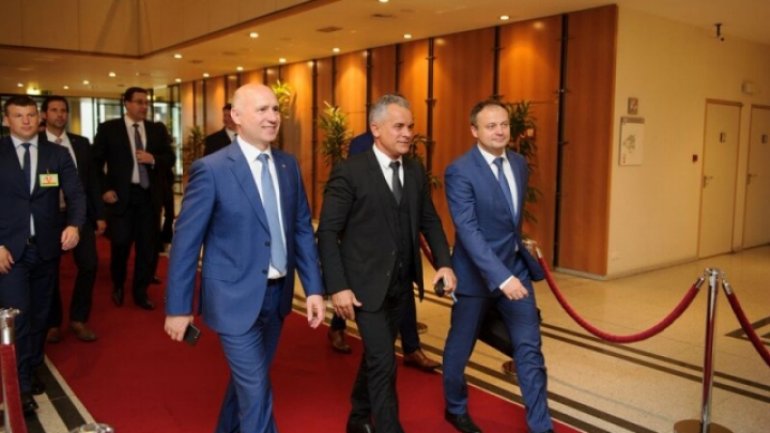 The president of the Democratic Party from Moldova, Vlad Plahotniuc, is on an official visit with political bias to Brussels.

He is meeting European leaders tackling issues related to Moldova’s relations with the EU, Moldova’s development strategy, the reform of government and politics.

Meeting leaders of the Socialist group in the European Parliament, Vlad Plahotniuc insured yesterday the Chișinău government had committed to important reforms which started to yield output.

“The Cabinet has all the support of the Democratic Party and of the majority Coalition in carrying out the reforms. We assumed the harshest reforms since 2009, but the positive changes bear fruit and this was remarked by the International Monetary Fund and by the European Union. This proves the government observes its commitments in front of citizens and foreign partners,” said Vlad Plahotniuc.

The Democrats’ leader added the partners remarked the reforms and encouraged the Democratic Party to go on.

“It’s important to be directly informed by you about what’s going on in Moldova, since some so-called friends of yours present information not corresponding to reality here. We understand their vexation for not being in power,” the leader of the Socialist group (APSD,) Gianni Pittela.

Speaking about changing the electoral system as a move to reform the political class,

APSD deputy president Knut Fleckenstein recommended the Chișinău Parliament to continue the public debates on the bill: “We think you responded calmly to the notice of the Venice Commission. We encourage you to start new consultations on the issue.”

“We continue the debates and will take into account the recommendations of the Venice Commission when we pass the bill on passing to the mixed electoral system in the second reading,” Vlad Plahotniuc pointed out.

The leaders of the European Social-Democrats displayed their support for the move to change the Moldovan electoral system.

The move was openly seen by the leaders in the European Parliament, who specified the EU did want Moldova to quarrel with Russia, but encouraged Chişinău to defend its interests.

They agreed to stage a debate within the European Parliament regarding the misinformation and propaganda, starting from the draft out up by the Democratic Party.

Vlad Plahotniuc has other meetings on his today agenda.