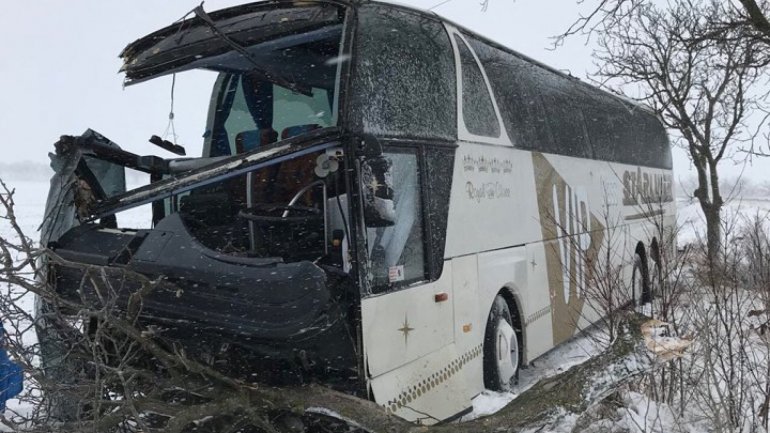 Movement on national roads is difficult. Due to snow, some parts of the roads have frozen, causing multiple accidents.

In Hâncești, a tour bus has hit a tree, while in Făleşti, a minibus with passengers ended up in a ditch.

Read also: Tour bus went off the lane and hit a tree near Bujor village

Near Hiliuți village, Fălești, a minibus going Bălți-Ungheni, with 12 passengers, was overthrown. Four people were injured and taken to the hospital. Other passenger were taken by another minibus.

In Glodeni district, due to frost, many cars fell in ditches. While near Iabloana village, a cab driver lost control over the vehicle and went off the lane.

Driver claim that they are very careful, as the roads are covered by snow.

According to the police, only in Glodeni district took place two accidents.

"For now the movement is going well and we urge drivers to be extremely careful and equipped fitting for this weather" patrol inspector,  Alexandru Cazac said.

If the snow will continue to fall, more special equipment will be sent over.

"New we have 5 vehicles, two special dumpers, two self-grading and a loader. Depending on how it goes, another five utilities will be sent over" Glodeni roads sector chief, Nicolae Gudumac said.

In Hâncești district, a bus with four passengers went off the lane and hit a tree. The driver had a fractured hand.

While on Chișinău-Leușeni road, multiple vehicles got stuck due to the snow.

State Roads Administration assures that all roads will be cleaned. Over 150 special vehicles were dispatched to spread skid-proof material.

"It is more difficult on M1 Lueuşeni-Chişinău, M5 sector from Bravicea to Codreanca, in Rezina on R20. There, we sent special vehicles to clean the roads off snow, as in some places it had a 20 cm depth" deputy director of State Roads Administration, Ion Drucec said.

Meteorologists issued a Yellow Warning in the whole country, valid till tomorrow.

Police officers urge drivers to use lower speed and be more careful.

According to rescuers, 41 settlements from 10 districts have partial power outage.

We speak of Criuleni, Strășeni, Orhei, Telenești, Nisporeni, Căușeni, Anenii Noi, Leova, Comrat and two suburbs from Chişinău. Rescuers warn that the wind might cause the risks of electricity cables snapping.