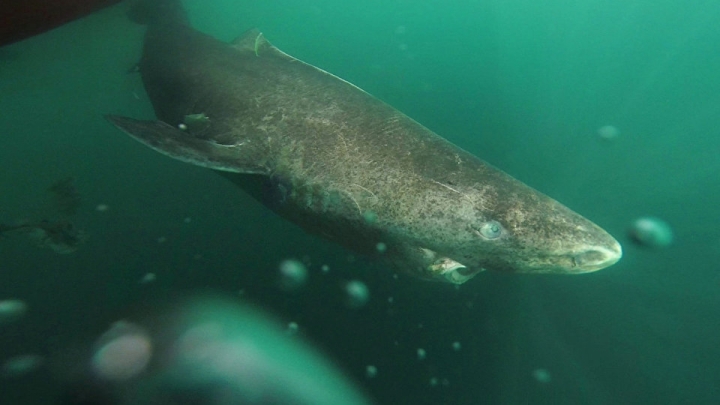 Although bowhead whales and Galapagos tortoises are the animal species we usually think of in terms of long lives, Greenland sharks have proven to be the Earth's longest-lived vertebrates, beating out their rivals with a lifespan of up to 400 years, a team of Danish researchers has found.

The researchers relied on radiocarbon dating techniques to establish the age of 28 female sharks, unintentionally caught by fishermen. Traces of radiation in tissues, such as eye lenses, are commonly used by researchers as one of the most correct ways to determine how old the creatures are, reports Sputnik International.

The largest shark, with a length of 502 centimeters, was found to be around 392 years old. This means that she was born in the early 1600s, at the time of the Thirty Years War, and during Shakespeare's peak period. Her younger cousin, measuring 493 centimeters, was calculated to be "only" 335 years old.

An adult Greenland shark can easily reach over five meters in length, which is on par with the great white shark and the tiger shark, the world's largest fish species. However, there is a vast difference in life expectancy. With a slow growth rate of about one centimeter per year, which is believed to contribute to their exceptionally long lives, Greenland sharks only reach maturity at the ripe age of 150, by which time they are no less than four meters in length. The average lifespan of the Greenland shark is therefore estimated at 272 years.

The reason for the outstandingly slow growth is that they dwell in colder waters than their cousins. Greenland sharks thrive in the Arctic waters of the North Atlantic, usually at a depth of 300-700 meters.

The Greenland shark, which among scholars goes by the name of Somniosus microcephalus, is the largest fish to prowl the Arctic waters. It spends most of its time lying in wait, preying on seals and fish and is not averse to devouring whale carcasses. Its slow reproduction rate makes the species somewhat vulnerable.

The flesh of the Greenland shark is poisonous due to the presence of neurotoxins, which upon digestion produce effects similar to extreme drunkenness.

The study was carried out in collaboration between the Greenland Institute of Natural Resources, the National Aquarium Denmark, the Arctic University of Norway, Indiana University-South Bend, the University of Oxford, and the Virginia Institute of Marine Science.