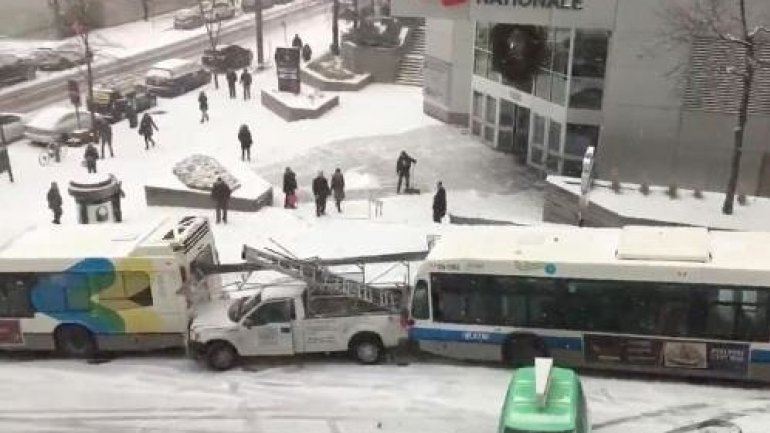 A slippery covering of ice and snow on a steep street in downtown Montreal has caused a slow-motion pile-up of cars, buses and trucks, The Guardian reports.

The drama took place at a busy intersection on Côte du Beaver Hall. Footage shows a bus sliding out of control and hitting a group of cars.

But the drama does not end there. A police car, sliding backwards down the hill, lights blazing, hits the bus. Finally a snow plough, presumably sent to the scene to clear the road, careens down the hill, hitting the police car fairly hard.

Amazingly, no one was injured in the pile up, which involved at least 10 vehicles.

Colin Creado witnessed the series of crashes on his way to work. He said the officers had managed to get out of the police car before the salt truck hit it.

“I could see the cop car literally jump in the air. It was pretty powerful,” he told Canada’s CBC news.

Creado said he was surprised city authorities had not gritted the street before the snowy weather hit during the night.

Video of the chaos posted by CBC on Twitter has been shared more than 9,000 times. The absurdity of the situation was not lost on social media users.