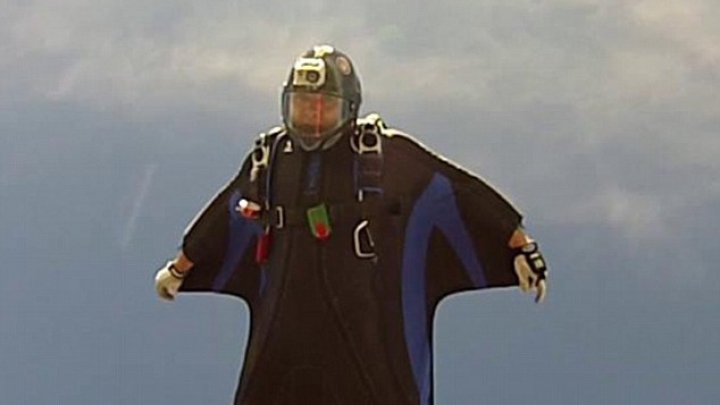 A skydiving instructor fell 487 meters to his death after he risked his own life to save a student whose parachute failed top open in mid-air.

Carl Marsh, 46, from Knutsford, in Cheshire, went the aid of Dominic Leeds after a piece of equipment snapped as they emerged through clouds during a training exercise.

But when the father-of-one helped Mr Leeds to release his reserve second parachute, he became entangled in the student's principal chute as it was being jettisoned away.

Although Mr Marsh managed to cut himself free, it is thought he then lost consciousness when his own parachute began spiralling to the ground at high speed and was unable to steer himself to safety.

He suffered multiple fatal injuries in the ensuing impact and died at the scene. His teenage son was working on the ground at the time.

Mr Marsh, an expert instructor, who had performed 1,150 jumps all over the world had gone up in a Cessna Caravan aircraft with Mr Leeds to teach him a 2-way manoeuvre called a 'canopy formation'.

The pair jumped out at 2438 meters above ground but as Mr Leeds attempted to release his parachute, a toggle broke and Mr Marsh went to help him.

'I didn't immediately execute my emergency procedures because I was worried that Carl was very close or behind me.

'I said to him: 'Mate, my brake line has broken' and I remember him replying to me: 'Okay buddy, don't worry.' We were coming through the clouds at this point and he said: 'Don't worry I'll come and dock on your canopy and we will go down together.'

'I should have told him we will go down side to side - at this point we had plenty of time to fly down safely before having to deploy my reserve parachute.

We had good communications at this point. I saw two parachutes down below me so I said: 'Can we wait a second whilst they separate' and Carl turned us in a different direction.

'At this point Carl was telling me I needed to break off. I remember having a huge surge of adrenaline as the reality and fear of what was happening set in.

'Carl said: 'Come on buddy you need to cut away,' and he said this as an instruction. I pulled out the red lever and released my canopy and fell away from him. I went into free fall and then deployed my reserve parachute.

'As I cut free, my primary parachute became wrapped around Carl's legs. I had so much adrenaline at this point I couldn't tell whether he said anything else to me but I don't remember him saying anything. I looked back to see that Carl was spiralling with my canopy on the bottom of his legs.'

Mr Marsh's 19 year-old son Craig, who works at the centre and was present that day told the inquest: 'He was the best dad I could have had - he did everything for me. He was always looking out for others and always put other people first before himself.'

Mr Marsh, was an experienced parachutist and held BPA qualifications.

He worked for TrustFord car dealership in Wilmslow at the time of his death. He had previously worked at garages in the Greater Manchester area including Evans Halshaw in Altrincham.