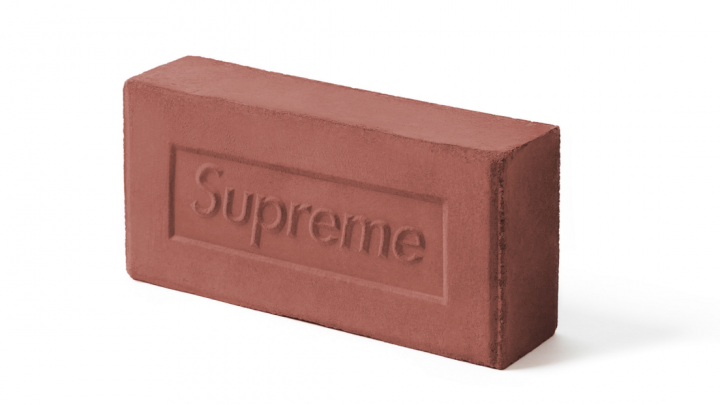 On Thursday, 29 September 2016, skate and fashion brand Supreme released a red clay brick for sale on its website for the price of $30, reports Grind TV.

There was nothing special about the brick, save for the Supreme logo stamped on it. It was eight inches long, four inches wide and cost about 6000 percent more than your average red clay brick.

And it sold out in minutes. This isn’t the first time Supreme has sold an accessory — which is what the brick is marketed as — with seemingly no connection to the skate or fashion industry.

Highlights of some of their past “accessories” include a hammer and a fire extinguisher. They currently have a soup set and a lucite box listed on their website.

But the fervor that the brick has elicited online is unique.

Currently on eBay, some people are attempting to sell individual bricks for over $1,000 each. Someone on Reddit actually took the time to calculate how much it would cost to build an average-sized home entirely out of Supreme bricks (roughly $4.7 million). It has spawned countless memes and jokes:

Brick sold out... Now I know why pic.twitter.com/iOW0JXuMc2

The brick is just the latest testament to the power of Supreme’s brand.

The skate brand prides itself on not giving a damn, and that attitude has developed a devoted following that borders on being cultish.

For instance, the hashtag #Supremebrick already has hundreds of posts on Instagram, many of which are accounts dedicated to buying and reselling Supreme gear at a profit.

GrindTV has reached out to Supreme for comment on the brick, and also to multiple brick purchasers, to attempt to figure out the reasoning behind selling, and buying, a red clay brick for $30.

Though we suspect Supreme’s answer might be, “To prove we can sell anything.”