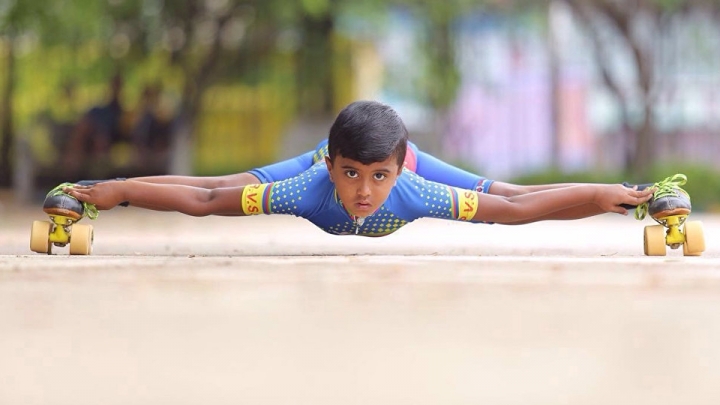 This week marks the annual Guinness World Records book release - a world famous monster title that itself holds a world record as the best-selling copyrighted book of all time. To acknowledge its release, Sputnik caught up with a remarkable young record breaker from India, who has just outdone another skater's previous accomplishments.

Six-year-old Om Swaroop Gowda is a bit of a local celebrity in his hometown of Bangalore, India. He is in fact, rather well-known around the world with his unique record-breaking "limbo skating" skills.

The six-year-old started skating at the early age of four and a half and has received much adulation for being able to do what he does.

Over the years, he has mastered the art of being more flexible than a Yogi on wheels.

In the latest attempt which took place recently at the Orion Shopping Mall car park in Bangalore the six-year-old skating marvel managed to hold his body parallel to the ground and skate under 36 jeep vehicles in a row, covering a full distance of just over 65 meters and with his face just inches from the ground throughout. Gowda smashed the previous world record of 48.21 metres made in 2012 by another equally remarkable limbo skater.

When asked about young Om's future aspirations, his father said: "We would like for him to pursue a future career in sport and who knows, maybe even for him to be able to compete in something like the Olympics and representing India would be a dream for him!"

His coach, Raghavendra who was one of many spectating his student on the day of the record attempt said he was equally proud of his student's achievement and said that he looks forward to seeing how far he can take his talent and unique abilities.