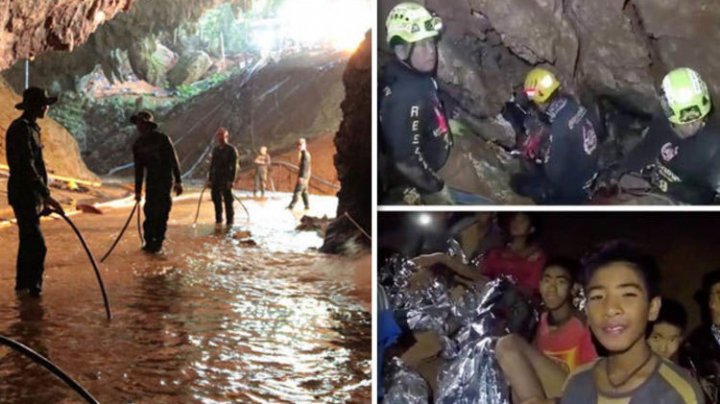 Half of the group of boys trapped inside a cave in northern Thailand for two weeks have been been brought out, officials say.

Rescuers decided to go ahead with the hazardous operation on Sunday because of fears of rising waters.

Divers are guiding the 12 boys and their coach through darkness and submerged passageways towards the mouth of the Tham Luang cave system.

They are being rescued in groups. It is unclear how long the mission will take.

However, it is moving much faster than officials had earlier predicted.

Six boys are now reported to be above ground.

The BBC's Dan Johnson, who is at the scene, said doctors went to assess the boys on Saturday and decided on a priority list, sending the weakest out first.

A huge volunteer and media operation has built up around the mouth of the cave over the past week.

But early on Sunday, journalists were told they had to move down the road, sparking speculation that a rescue mission was about to begin.

Narongsak Osottanakorn, who has been leading the operation, then confirmed that 18 divers had gone in to get the boys.

"This is D-Day," he said. "The boys are ready to face any challenges."

He added that the boys had all been assessed by a doctor and were "very fit physically and mentally... They are determined and focused".

The group and their families had all given their agreement that they should be moved as soon as possible, he said.