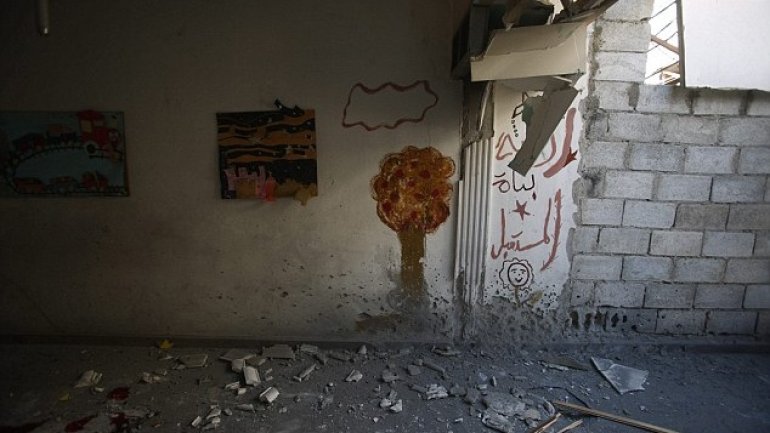 Six children have been killed after a nursery school in Syria was reportedly bombed by forces loyal to the Syrian regime, reports Daily Mail.

Agonizing photos of young children covered in blood have emerged from the rebel-held city of Harasta, a rural suburb of the country's capital, Damascus.

The Britain-based Syrian Observatory for Human Rights monitor said 17 people, most of them children, were also injured in the shelling.

Local reports claim forces loyal to the government fired artillery that hit the kindergarten at around 10 am local time.

One of the children killed has been named by the group as Jihad Qadado, son of martyred Syrian Civil Defense force member Abdulfatah Qadado.

An AFP photographer saw the body of one child, a girl, lying on a bed at a makeshift hospital, her face bloodied and her clothes torn.

At the kindergarten, smears of blood were left on the tiled floor, underneath a small red slide propped against a wall painted with children's drawings.

In the northern city of Aleppo, residents spoken to by Reuters seemed resigned to a resumption in bombing, which killed hundreds of people in late September and early October as the government and its Russian allies abandoned a ceasefire to launch their assault on the biggest urban area in opposition hands.

'Nothing can be done. Nobody can stop the planes,' said Bebars Mishal, an official with the 'white helmets' in eastern Aleppo, which digs victims out of the rubble and runs an ambulance service.

He said there was no way for rescue workers or medical staff to prepare in advance of the expected resumption of attacks: 'All we can do is take precautions and be ready 24 hours a day.'

The government and its Russian allies say they target only militants, and that fighters are to blame for civilian casualties by operating in civilian areas.

Rebels say the aim is to drive out civilians, some 275,000 of whom remain in the besieged zone.

'They call it a ceasefire. The regime hasn't let us hear the end of it,' said Modar Shekho, a nurse in rebel-held eastern Aleppo. 'As usual, when it ends they will let the bombardment loose. We've gotten used to this.'

More than 11 million people, nearly half Syria's population, have been driven from their homes by the war since 2011, including 5 million who fled abroad as refugees.