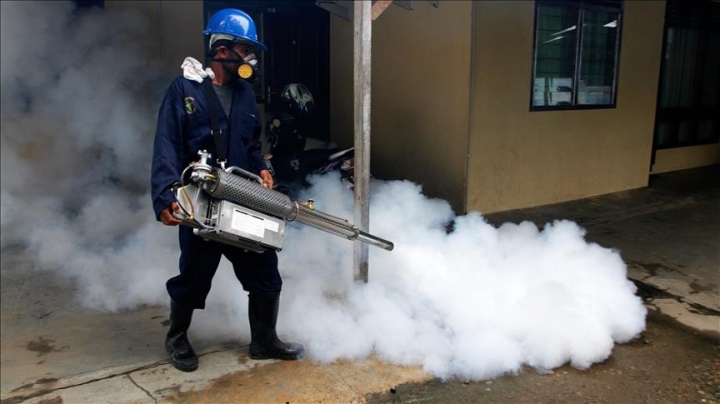 Singapore is pushing ahead with vector control measures against mosquitoes with the number of infections of Zika ballooning to 82 just four days after the first confirmation of a locally-transmitted case, reports Anadolu Agency.

Authorities continued Wednesday to carry out inspections of premises in areas where Zika clusters have been identified, conducting fumigation to destroy breeding habitats.

Meanwhile, demand for mosquito repellent sprays and patches has spiked, with supermarkets and pharmacies assuring that they are well-stocked.

Minister Nila Moeloek was quoted by kompas.com as telling reporters at the Parliament Complex, "for those who want to go to Singapore, [trips] should be postponed.”

The advisory was particularly directed at pregnant women, whose exposure to Zika could result in microcephaly, a birth defect in which babies have abnormally small heads that may signal that the brain is not properly developing.

The ministry has instructed health offices at airports and other points of entry to screen passengers using thermo-scanners and to conduct blood tests on those found to have fevers.

Foreign Minister Retno Marsudi said her ministry is communicating with others and continuing to request information from the Indonesian embassy in Singapore to monitor the spread of Zika.

"There are several entry points that must be equipped with detection tools for those coming from Singapore to Indonesia," she was quoted by kompas.com as saying Wednesday at the Parliament Complex.

According to the health minister, Zika cases in Indonesia have been detected among an indigenous tribe that lives deep in the forests of Sumatra island as well as among foreign tourists leaving the country.

Zika is primarily transmitted by the bite of the Aedes mosquito, and many countries in South America have been experiencing outbreaks of the virus -- with Brazil being particularly hard hit since reporting its first case in May 2015.

Doctors believe as much as 80 percent of those infected with Zika never develop symptoms, while those who have symptoms suffer from fevers, joint pain and rashes. The virus has been linked to serious birth defects, including microcephaly.