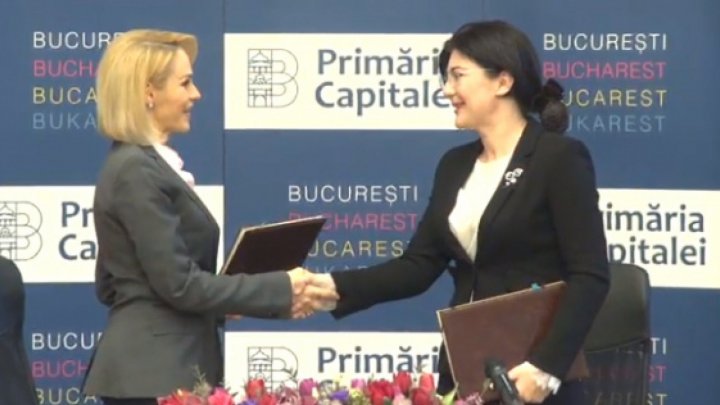 Interim Mayor of Chisinau, Silvia Radu and Mayor of Bucharest, Gabriela Firea, have signed today an cooperation Program between the two cities. The document foresees cooperation between Chisinau and Bucharest in some prioritized areas, as well as joint actions that will be taken in the near future.

In terms of culture, Chisinau City Hall will launch a transport route that will offer tours of touristic and cultural sights from the Capital of Republic of Moldova, while the Romanian party will offer consultations for the project's implementation, as well as donate 2 buses that will be used for this purpose.

At the same time, starting 2018, each year in both cities will be organized a bilateral project "Bucharest Theater Week in Chisinau and Chisinau Theater Week in Bucharest". The project foresees that both cities, during a week, will present spectacles from the theaters of the partner city. Based on a cooperation protocol which will be signed between Bucharest Metropolitan Library and Municipal Library "B.P. Hasdeu", the two institutions will exchange library units, while the institution from Bucharest will offer an important book donation to the library from Chisinau.

Education represented another cooperation priority for Chisinau and Bucharest. Here, Bucharest will offer logistic and material support for renovation works to be made in „Mihai Eminescu” Lyceum form the Capital, an institution which, in 2019, will celebrate its 50th anniversary. At the same time, Chisinau City Hall will offer spots in summer camps organized for pupils awarded in competitions and Olympiads from Chisinau.

Mayors of Chisinau and Bucharest, Silvia Radu and Gabriela Firea have also established other areas where joint projects will be launched, such as: city planning, urban development, attracting European funds,  transport, environment and protection of stray animals. The Cooperation Program between Chisinau and Bucharest was signed during the official meeting between interim Mayor of Chisinau, Silvia Radu and Mayor of Bucharest, Gabriela Firea.

At the end of the press conference, the two mayors have offered gifts to each other. Firea gave Silvia Radu a Romanian blouse and a photo album with monasteries from Romania. While Interim Mayor of Chisinau has gifted a "Moldovan blouse" and an icon.