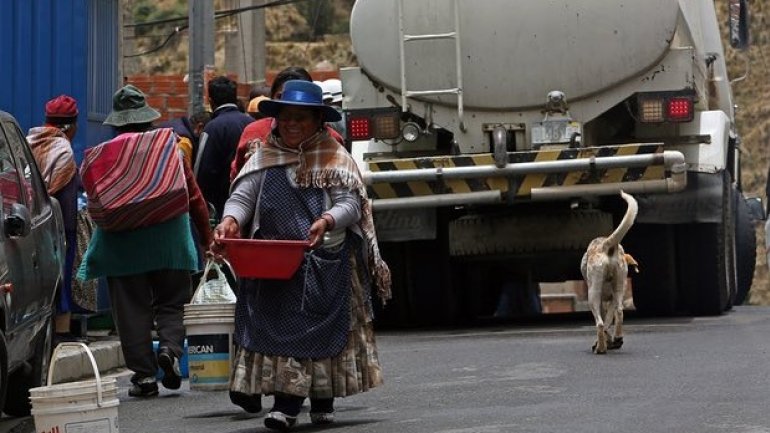 The government of Bolivia, a landlocked country in the heart of South America, has been forced to declare a state of emergency as it faces its worst drought for at least 25 years.

Much of the water supply to La Paz, the highest capital city in the world, and the neighboring El Alto, Bolivia’s second largest city, comes from the glaciers in the surrounding Andean mountains.

But the glaciers are now shrinking rapidly, illustrating how climate change is already affecting one of the poorest countries in Latin America.

The three main dams that supply La Paz and El Alto are no longer fed by runoff from glaciers and have almost run dry. Water rationing has been introduced in La Paz, and the poor of El Alto – where many are not yet even connected to the mains water supply – have staged protests.

The armed forces are being brought in to distribute water to the cities, emergency wells are being drilled, and schools will have to close two weeks ahead of the summer break.

President Evo Morales sacked the head of the water company for not warning him earlier of the dangerous situation, but the changes produced by global warming have been evident for some time.

A recent report by the Stockholm Environment Institute (SEI) says: “Temperatures in the region have risen by 0.5C in the period 1976 to 2006, and the people of La Paz and El Alto can observe evidence of climate change in the form of the shrinking snowline in the mountains above them.

One glacier on Chacaltaya mountain – which rises above El Alto and which once hosted the world’s highest ski resort – has already completely disappeared. And the two Tuni-Condoriri glaciers that provide water for El Alto and La Paz lost 39% of their area between 1983 and 2006 – at a rate of 0.24 sq km per year.”

The SEI says that if the regional and global climate models that predict a two-degree rise in temperatures by 2050 are right, many small glaciers will completely disappear, while others will shrink dramatically.