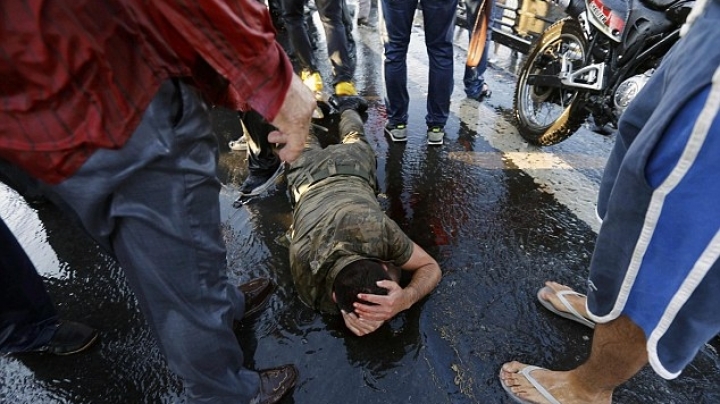 A photograph has surfaced online showing dozens of Turkish soldiers huddled together naked on the floor following their surrender during the failed military coup, reports Daily Mail.

The army personnel look to have been stripped of their uniform as they lay on the floor on an indoor basketball court in Sirnak, east Turkey, handcuffed as officials loyal to the Government look over them.

The group of soldiers are a part of more than 6,000 rebels to be detained in the aftermath of the failed uprising that killed at least 250 and wounded more than 1,500. It comes as Turkish President Recep Tayyip Erdogan has vowed to purge all state institutions of supporters of an Islamist cleric his government blames for Friday's coup attempt.

Speaking at a funeral in Istanbul on Sunday, Erdogan broke down in tears as he vowed to cleanse the country of the 'virus' of Fethullah Gulen supporters.

He said Turkey, through the justice ministry and foreign ministry, would request the extradition of the cleric, who is based in the United States, and his backers. He has denied any involvement in the coup effort.

Some 104 plotters were killed after a coup attempt to bring down the Turkish government, while 160 people - at least 41 of them police and 47 civilians - fell as 'martyrs'.

The rebel army faction said they were trying to overthrow the government to 'protect human rights' and restore democracy from Erdogan's Justice and Development Party, AKP, which has repeatedly faced criticism over its brutal crackdowns on anti-government protesters.

However, Erdogan has blamed his old scapegoat, Fethullah Gulen for orchestrating the uprising.

Muslim cleric Gulen, the president's rival who lives in self-imposed exile in Pennsylvania, U.S. as the head of a billion dollar religious movement, has often been blamed for political unrest in Turkey.

After launching the coup, the Turkish military imposed a curfew on civilians telling them to stay in their homes, but Erdogan called on supporters to ignore the order and take to the streets, which is thought to have caused the army to relinquish control.