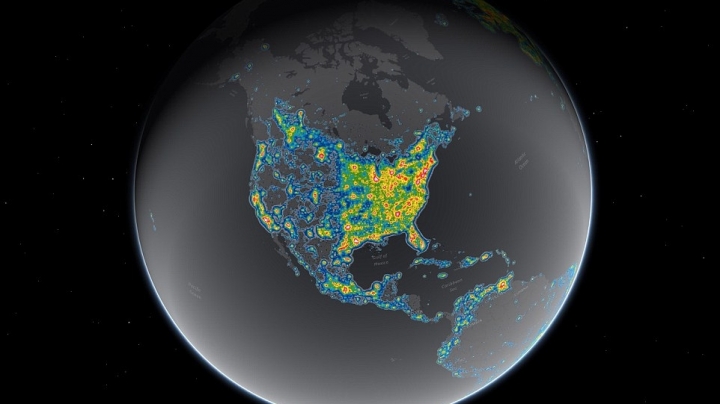 According to Daily Mail, experts have revealed that one in three of us are unable to see the brilliant river of stars that makes up the Milky Way, including 80 per cent of Americans, because of light pollution.

They have created a global atlas of light pollution to show where you are most likely to see the beautiful dim glowing band across the sky and where it is all but a faded memory – in much of Italy and South Korea, for example.

Light pollution is a growing problem in the majority of developed countries, with constantly lit cities creating a luminous fog, or ‘skyglow’, that swamps the stars and constellations of the night sky.

‘We've got whole generations of people in the United States who have never seen the Milky Way,’ said Chris Elvidge, a scientist with NOAA's National Centers for Environmental Information in Boulder, Colorado.

‘It's a big part of our connection to the cosmos – and it's been lost.’

Dr Elvidge is part of a team which used high-resolution satellite data and precision sky brightness measurements to produce a global atlas of light pollution, which the group claims to be the most accurate assessment yet.

Using low light imaging via the Suomi National Polar-orbiting Partnership satellite and ground observations from 20,865 locations around the world, the international team found light pollution is most extensive in countries like Singapore, Italy and South Korea.

Focusing on light pollution in the G20 countries, the experts found that in terms of area, Italy and South Korea are the most polluted, and Canada and Australia the least.

Residents of India and Germany are most likely to be able to see the Milky Way from their home, while those in Saudi Arabia and South Korea are least likely.

Dr Falchi who led the study, published in the journal Science Advances, said: ‘I hope that this atlas will finally open the eyes of people to light pollution.’

Despite the vast open spaces of the American west, almost half of the US experiences light-polluted nights.

Light pollution does more than rob humans of the opportunity to ponder the night sky.

For example, a recent study showed light pollution confuses baby turtles making their way out to sea for the first time, making the endangered creatures rich-pickings for predators.

Fortunately, light pollution can be controlled by shielding lights to limit shine to the immediate area, reducing lighting to the minimum amount needed, or by simply turning them off, but this requires a change in human behaviour, which can be difficult to achieve.