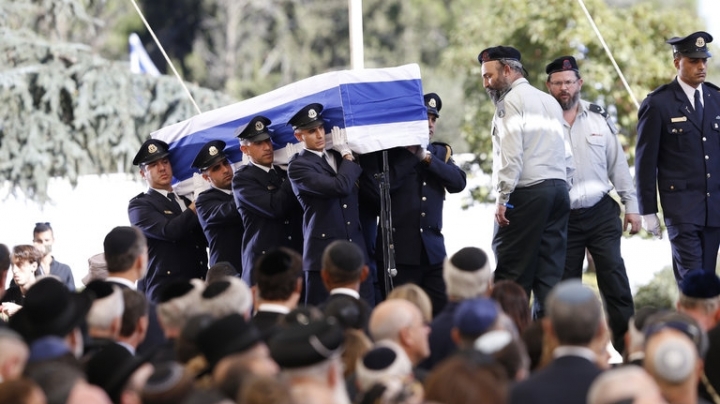 World leaders have hailed the vision of the late Israeli leader, Shimon Peres, as he is laid to rest three days after he died at the age of 93, reports BBC.

Israeli Prime Minister Benjamin Netanyahu described him as "a great man of the world", as he led the eulogies.

US President Barack Obama said the presence of Palestinian leader Mahmoud Abbas at the funeral was a reminder of the "unfinished business of peace".

Mr Abbas was among dozens of foreign dignitaries attending in Jerusalem.

Security was intensified ahead of the ceremony, with several people arrested.

Delivering an emotional address, Mr Netanyahu said that while Israel and the world grieves for Mr Peres there was hope in his legacy.

Former US President Bill Clinton, who helped negotiate the Oslo peace accords between Israel and the Palestinians in the 1990s that led to a Nobel Peace Prize for Shimon Peres, said he was Israel's "biggest dreamer".

US President Barack Obama closed the eulogies, comparing Mr Peres to "some of the other giants of the 20th Century that I've had the honour to meet, like Nelson Mandela and Her Majesty Queen Elizabeth".

Mr Peres, he said, believed in equality for Palestinians.

Earlier on Friday, Mr Peres' coffin was escorted by a military honour guard from the parliament building in Jerusalem to Mount Herzl, Israel's national cemetery, where he will be laid to rest alongside many of the country's former leaders.

Jordan and Egypt - the only two Arab countries to have signed peace deals with Israel - have both sent official representatives to the ceremony.

The body of Mr Peres had been lying in state outside parliament in Jerusalem since Thursday.

Israeli police said 8,000 officers have been deployed for the security operation as thousands of people were expected to attend the funeral.

The funeral was expected to be the largest such event in Israel since the funeral of Prime Minister Yitzhak Rabin, who was assassinated by a Jewish nationalist in 1995.

Mr Peres suffered a stroke two weeks ago and died on Wednesday, aged 93, in a hospital near Tel Aviv.