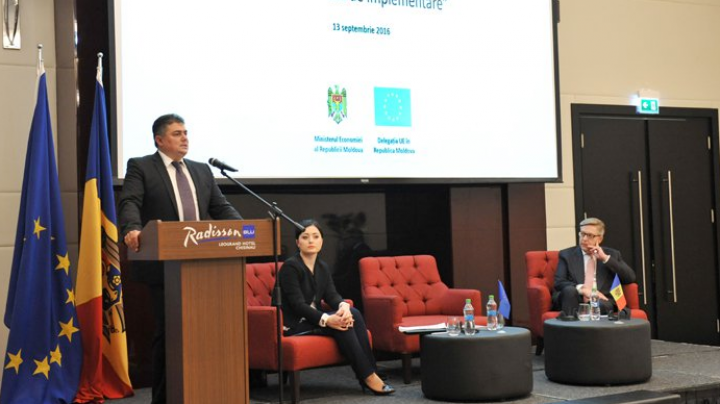 The agreement on the creation of the Deep and Comprehensive Free Trade Area (DCFTA), which entered into force on 1 September 2014, will turn Moldova into a prosperous country. Deputy Prime Minister, Economics Minister Octavian Calmic made a statement to this effect at a conference titled, DCFTA – Two Years of Implementation, today, Moldpres informs.

According to the minister, by the signing of the DCFTA Agreement, which is a component part of the Moldova-EU Association Agreement, a decisive step has been made towards a comprehensive integration of the national economy into the European Union’s one. “By the signing of DCFTA, our country took the foremost commitment to carry out reforms in the energy and commercial policy sectors, in order to bring the national legislation in line with the EU acquis.” Octavian Calmic noted.

The economics minister also said that, from the moment of enforcing the DCFTA, Moldova had exported goods worth 2.2 billion dollars to the EU market. The share of the Moldovan exports to EU in 2016 hit 63.6 per cent, which is by about 13 per cent more against 2014, ahead of the Agreement’s signing. The net flow of foreign direct investments into the national economy in the first quarter of this year stood at 35 million dollars, which is 1.1-fold more against the fourth quarter of 2015. About 23 per cent of the investments used all over Moldova went to joint ventures and the enterprises with foreign property, which is by 2.3 percentage points more against the same period of the last year, Octavian Calmic also said.

“I am glad to participate in this event, in order to mark two years since the implementation of the DCFTA Agreement. The negotiations which led to the signing of this Agreement were direct and fast, and on this period, more achievements and success have been recorded, with EU becoming really the partner of Moldova,” Head of the EU Delegation to Moldova Pirkka Tapiola said in his speech.

“I am sure that the DCFTA’s implementation will really contribute to strengthening and developing Moldova’s trade, creating new jobs and attracting investments, as well as to implementing of a wider set of reforms in the economy sector. We want this country be successful and modernize. In this respect, Moldova has all pre-requisites to move forward,” Pirkka Tapiola said.

The head of the international cooperation general directorate at the Economics Ministry, Mihaela Gorban, unveiled statistic data during the two years of enforcing the DCFTA and specified that EU was the principal trade partner of Moldova. As for groups of goods, the export to EU includes: machines, electric apparatus and equipments, oleaginous seeds and fruits, furniture, cereals, fats and oils of vegetal and animal origin, drinks, clothes and accessories for knitted and crocheted clothes, preparations from vegetables and fruits, footwear, optical instruments and devices, etc.