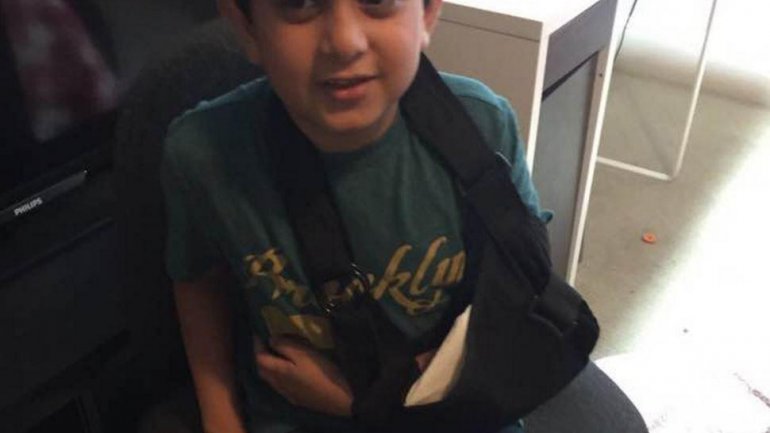 A seven year old boy was beaten on a schoolbus by five classmates because he was a Muslim, according to his father, Independent informs.

Zeeshan-ul-Hassan Usmani told The Independent his youngest son Abdul Aziz had been the victim of islamophobic bullying by two girls and three boys in the US state of North Carolina.

“He was coming home in a school bus when one of his classmates came to him and started forcing some food in his mouth,” he said. “Abdul said: ‘What is it? I only eat halal’. But the other boy wouldn’t say.”

“Then five classmates, who were only six or seven years old, started punching him in the face and chest," said Mr Usmani, a data scientist from Pakistan who first came to the US to study in 2004.

“They hurt his fingers, threw his backpack to the back of the bus and kept hitting him all the way from school to home. It was a really shocking experience. He was traumatised.”

Mr Usmani, who is on an extended visit to Pakistan for Hajj and Eid, said his wife told him what had happened on the phone on Friday.

He said he and his family had left the US to live in Pakistan in 2010, and had returned to America in 2014 – but after this incident, his wife and three sons had decided to join him in Pakistan and had arrived there early this week.

They were already planning a move to California from the town of Cary in North Carolina where they lived, but now Abdul has told his parents he does not want to return to the US at all.

“Since we arrived in the US [in 2014], we started having problems with islamophobia and anti-immigration statements,” he said. “Before 2010, we didn’t have these incidents. But we don’t feel safe in the US any more.”

“We’ve had issues with our eldest son and our middle son as well, but this episode with our youngest was the final nail in the coffin. My wife said: ‘That’s it. I’m coming back to Pakistan.’”

Lisa Luten of the Wake County Public School System said an investigation had been launched by the principle of Weatherstone Elementary School, where Abdul was a pupil.

Ms Luten said the school principle had tried to get in touch with the Usmani family by phone, but was unable to reach them.

He said his son had only told them about the religious element to the bullying over the weekend. Abdul has recovered from his physical injuries, except for a bump to his head, said Mr Usmani. But he said the family would remain in Pakistan until after the US elections next month.