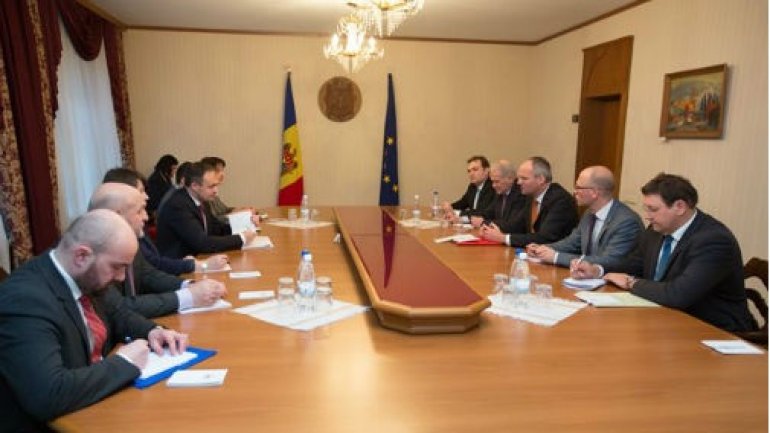 Any move undertaken to settle the Transnistrian conflict must take into consideration the Moldovan Constitution, the state’s unitary stance and it must be agreed on at the 5+2 format talks.

Parliament Speaker Andrian Candu made statements to this effect at a today’s meeting with Special Representative of the OSCE Chairperson-in-Office for Transnistrian Conflict Settlement Wolf Dietrich Heim, the parliament’s communication and public relations department has reported.

Andrian Candu reiterated the openness for giving a special status to the Transnistrian region. According to Candu, the subject of conflict’s settlement remains important on the parliament’s agenda. The speaker appreciated the progress made in 2016, on the period of the German OSCE chairmanship.

Also, the parliament speaker said that he would continue working on the platform of communication to carry out the policy of Moldova’s reintegration, created in 2016. This instrument allows identifying solutions to problems of the people from the region.

The platform convened at more meetings, with the participation of the heads of the parliamentary commissions, representatives of various state institutions, experts, present and former negotiators in the Transnistrian settlement process, in order to identify solutions to back citizens from the Transnistrian region.

For his part, the Austrian official appreciated the positive dynamic recorded so far, as well as the work carried out by the Platform of communication of communication to carry out the policy of Moldova’s reintegration. “I have noticed more good things started last year, which can be continued to have more results in 2017, in the conditions when the approach based on concrete results will be preserved, in the limits of the formula of settlement supported internationally,” the special representative of the OSCE chairperson-in-office for Transnistrian conflict settlement said.

The officials discussed a joint agenda of actions of Moldova and OSCE for 2017 in the Transnistrian conflict settlement.

At the meeting, Wolf Dietrich Heim said that Austrian Foreign Minister, OSCE Chairman-in-Office Sebastian Kurz would pay a visit to Moldova in early next February.