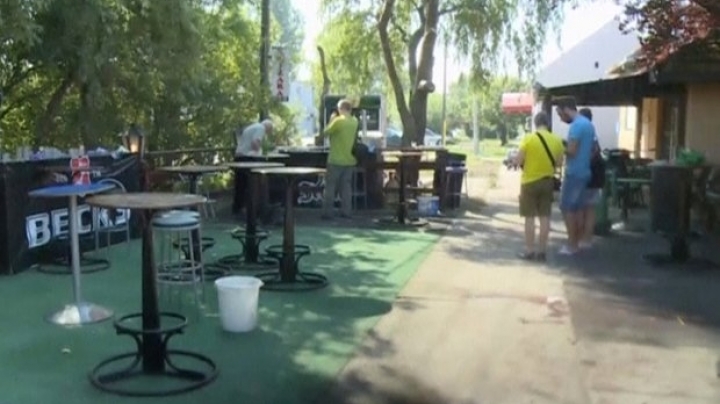 A man has shot dead five people, including his wife, and injured another 20 at a Serbian cafe.

The man entered the cafe in the town of Žitište, about 50 miles (80km) north of Belgrade, and opened fire with an automatic rifle, a police statement said.

Named only as ZS by police, the man was seen arguing with his wife in the cafe before leaving the building and returning with a Kalashnikov-style gun.

Two people were killed instantly, while three died after being taken to hospital in the nearby city of Zrenjanin. The wounded were taken to various hospitals but were not in critical condition.

The interior minister, Nebojša Stefanović, visited the scene and told reporters that jealousy was believed to be the motive, adding that the attacker was arrested after trying to run away.

“We are all shocked that something like this could happen, since this was a very quiet man who had no police record,” he said.

It is the third mass shooting in recent years in Serbia, which has tried to reduce the number of illegal weapons in circulation since the Balkan wars in the 1990s.

Last year, a 55-year-old man opened fire in a northern Serbian town in an apparent drunken rage over his son’s wedding, killing six people including the bride and her parents.

In 2013, a 60-year-old Serbian war veteran shot dead 13 people as he rampaged through his village about 30 miles south of Belgrade.

Police have previously said there could be several hundred thousand unregistered weapons in Serbia, including guns and grenades, left over from the wars.

The interior ministry has launched a drive to encourage owners of illegal weapons to hand them in to police stations.