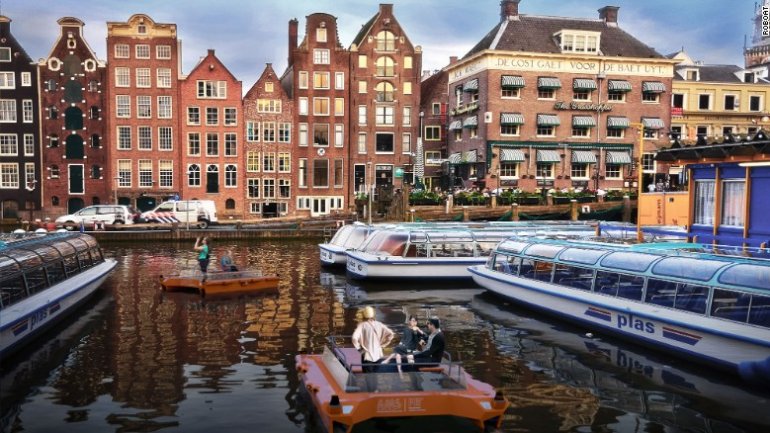 As self-driving cars begin to appear on public highways, the first autonomous boats are heading for the waterways of Amsterdam, reports CNN.

The "Roboat" is expected to make its maiden voyage in 2017, the product of a $27 million collaboration between the Massachusetts Institute of Technology (MIT) and the Amsterdam Institute for Advanced Metropolitan Solutions (AMS).

The cutting-edge crafts will offer a range of urban solutions from public transport to pollution sensing and water-based venues.

If trials are successful, a fleet of Roboats will soon be operating in the Dutch capital, and around the world.

The autonomous boats will provide an alternative, eco-friendly transport option.

The boats are designed to be light and easy to maneuver, says van Dijk, so that they can quickly and easily reach all points of Amsterdam's extensive canal network, which made the city the obvious location for the project.

The design also allows boats to be connected together to form floating bridges and platforms, that could be used for purposes from disaster relief to open air concerts.

Roboats will be fitted with a battery of sensors to deliver sophisticated data on water and air quality, as well as information on pollution - including the numerous bicycles that fall in the city's canals each year.

The team hope this data could inform policy to improve air and water quality in Amsterdam, and eventually in countries such as India where dirty water is a deadly threat.

The vessels make use of techniques developed for autonomous cars, although the demands are different.

Perfecting these systems will be a laborious task, which is why the project will last five years despite the first prototype hitting the water in 2017.