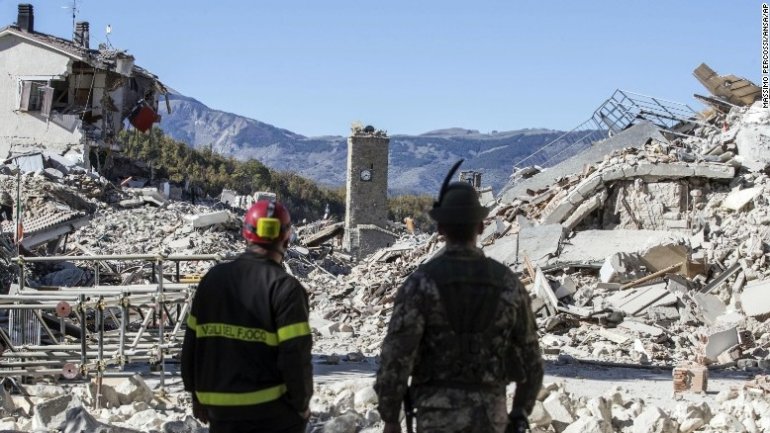 Scientists have warned that central Italy faces a serious risk of suffering further devastating earthquakes in the near future. The region – in central Italy north of Rome – has already been struck by three major tremors over the past few weeks. Seismologists believe a further earthquake could soon strike the region.

“Given what we have discovered about these three related earthquakes, there is a real chance that there is going to be another significant quake in the region in the very near future,” said Richard Walters, a lecturer in earth science at Durham University. “That is well within the bounds of possibility.”

Earthquakes are caused when enormous amounts of energy are released as sections of rock, subjected to intense pressure miles underground, move abruptly. This energy is released in the form of seismic waves, which cause the ground to shake, sometimes with highly destructive consequences.

In western Europe, the region with the highest seismic hazard is the mountainous backbone of peninsular Italy, the Apennines. It has a long record of earthquakes spanning back to Roman times.

Scientists now know that the region is prone to earthquakes because it is being stretched in a north-east/south-west direction at a rate of about 3 mm a year. “That is roughly a tenth of the rate at which your fingernails grow,” said Walters.

Some of this geological stretching is due to the underground tectonic plates on which Italy sits and which are moving apart. In addition, it is thought that Earth’s mantle under the crust is pushing upwards and this also leads to stretching.

This pulling of the Earth’s crust across Italy leads to the build-up of elastic energy, which is suddenly released, periodically, in earthquakes. “Unfortunately we do not know the exact timing of when this is going to happen,” added Walters.

On 26 September 1997, a sequence of earthquakes, including six that had magnitudes of between 5 and 6 on the Richter scale, struck the Umbria-Marche region and killed 13 people. More than 40,000 were left homeless. And in 2009 the 13th-century city of L’Aquila was struck by a 6.3-magnitude quake which left 308 people dead, more than 1,500 injured and more than 65,000 homeless.

But the most recent earthquakes have been the most dramatic. On 24 August, this year, there was a 6.2-magnitude earthquake near Amatrice that killed more than 250 people. This was followed by a 6.1 earthquake, which struck Visso on 26 October. One man died after a heart attack.

Four days later, the village of Arquata del Tronto was destroyed by a 6.6 earthquake. Two women died of heart attacks during the quake.

All three earthquakes were closely related, said Walters. “An earthquakes occurs when there is a slip at an underground fault which releases energy. But it transfers stress on to a neighboring fault. This effect can trigger other events.”

Seismologists now believe that the August earthquake at L’Aquila damaged two nearby geological faults, known as Laga and Vettore. The latest earthquakes – on 24 and 30 October – have further broken portions of the Vettore fault. So far, only the top segments of these faults appear to have been affected, but the deeper regions soon could be. “It opens up the prospect that the lower part of the Vettore fault could still fail and we would get another big earthquake,” said Walters.

There was a precedent, he added. In Tibet, there was a quake in 2010 when there was slippage in the shallow section of geological fault. Ten months later, the deeper section suffered a similar slippage, triggering a new earthquake. “That could be a possibility here,” said Walters. “I would not like to rule that out.”

But seismologists have found no tell-tale signs on the surface to indicate where and when that underground slippage will occur. Techniques include measuring strain rates in rocks, looking for changes in electrical signals from rocks, and examining alterations in the behavior of ground water, searching for chemical or thermal anomalies in a region, or analyzing electromagnetic variations. None has proved effective.

“We know there is a real risk of another quake, but cannot say exactly where it will strike – or when,” Walters added.