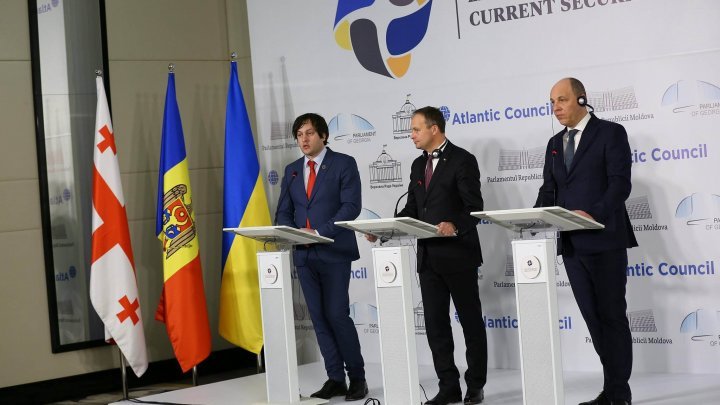 Moldova, Georgia and Ukraine condemn Russia's aggressive actions in the region. Concern over illegal settlement of Russian troops in Moldova and Moscow's interventions in Georgia and Ukraine are main topics analyzed in the Summit by the three Legislators.

Officials reaffirmed their commitment to European integration as it is the only and most effective instrument to ensure long-term prosperity, security and long-term stable development.

The Parliament Presidents are deeply concerned about external coordinated support for separatist movements, which incite hatred on ethnic and linguistic criteria. Moreover, they mentioned that the intention to enhance relations with the EU and NATO is discredited by propaganda messages.

The three officials condemn the grave and systematic violation of human rights, including illegal detentions, crimes and failure to impose control over the occupied regions of Georgia and Ukraine. They also urged colleagues in the EU Member States and the United States to continue to support Georgia, Moldova and Ukraine in implementing democratic reforms.

Andrian Candu, Irakli Kobakhidze and Andriy Parubiy call on the Governments of Georgia, Moldova and Ukraine to undertake ambitious joint commitments with a view to deeper cooperation on defense and security.

They also asked Western counterparts' support in the fight against attempts to undermine states sovereignty, coordinated from the external side.

"Our countries, Moldova, Ukraine and Georgia, know what the aggression is. I would say we are "Shield of Europe". We need the support of the European Forces, "said Andriy Parubiy, the Chairman of the Verkhovna Rada, the Ukrainian parliament.

"We are facing instability in the region, external attacks on territorial integrity and sovereignty, but also on our right to choose our future. Even so, we are determined to remain independent, to choose our own future and to enjoy the European family, "said Georgian Parliament Speaker Irakli Kobakhidze.

At the summit, Atlantic Council Vice President Damon Wilson said the institution he represents is alongside the Eastern Partnership countries and is working with them to end the conflicts in the region. The purpose of the conference is to support the countries where Russia maintains its influence, in order to overcome the challenges and further ahead the progresses.

The Inter-parliamentary Conference "Georgia, Moldova and Ukraine: Eastern Partnership and Current Security Challenges" took place at the initiative of the three legislators.

The event was attended by about 150 senior officials and international experts, including heads of the legislatures, MEPs and US Congress representatives.