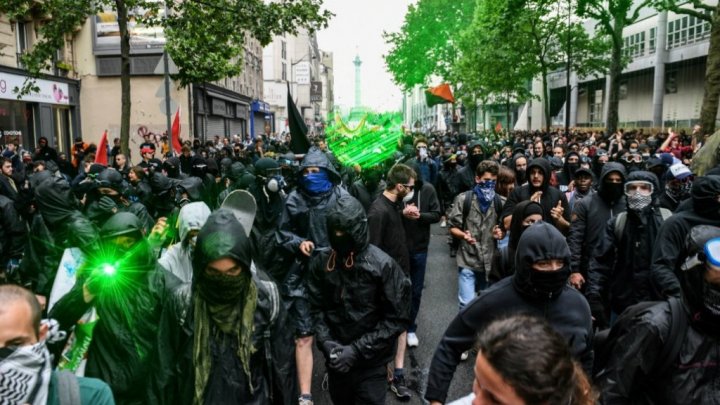 France's zero-tolerance approach to protest violence will be tested Wednesday when a heady mix of labour unionists, yellow vest demonstrators and hardline hooligans are expected to hit the streets of Paris for May Day.

Authorities have warned that this year's May 1 marches could be tense, coming barely a week after leaders of the yellow vest anti-government movement angrily dismissed a package of tax cuts by President Emmanuel Macron.

And with trade unions hoping to raise their profile and thuggish "casseurs" vowing to turn Paris into "the capital of rioting", the government has pledged to deploy security on an "exceptional scale" throughout the capital, writes France 24.

Officials are bracing for a repeat of last year's May 1 violence, when they were caught off guard by some 1,200 trouble-makers who ran amok in Paris, vandalising businesses and clashing with police.

More than 7,400 police and gendarmes will be deployed across Paris on Wednesday, with orders from Macron to take an "extremely firm stance" if faced with any violence, government spokeswoman Sibeth Ndiaye said on Tuesday. She said the measures are aimed at protecting peaceful protesters as well as shopkeepers and other citizens.

Paris police banned demonstrations in the Champs-Elysees avenue and the areas around the presidential palace and Notre Dame Cathedral.

Police ordered shopkeepers, restaurants and cafes on the protesters' path to close and are planning to search demonstrators' bags and carry out identity checks

Interior Minister Christophe Castaner said the authorities had found several groups on social media urging protesters to transform the city into "the capital of rioting", with police gearing up for the arrival of up to 2,000 activists bristling for a fight.

"Based on the information we have, 1,000 to 2,000 radical activists, potentially reinforced by individuals coming from abroad, who could try to spread lawlessness and violence," he told a press conference.

Many are anti-capitalist youths, often known as "black blocs", who dress in black and wear face masks.

Security forces are being deployed in Parisian train stations to head off additional “black blocs” intelligence services fear may be coming from Italy, Spain and Germany.

Nearly 200 motorcycle units will be deployed across the capital to respond quickly to flare-ups of violence, and drones will be used to track protesters' movements.

Castaner said police had already begun carrying out pre-emptive searches of anyone planning to march, a new tactic allowed under a security law passed recently in response to the yellow vest violence.

He said a handful of individuals had already been detained Tuesday, including one carrying "an extendable truncheon and a switchblade".

French security forces have already been on high alert for nearly six months over the weekly yellow vest demonstrations that have often spiralled into rioting and running battles with police.

But the yellow vests rejected it as too little, too late, pledging to keep up the protests that began in November over rising taxes on fuel and pensions which have since morphed into all-out rebellion.

Although the numbers have steadily fallen, with only 23,000 turning out last weekend down from a November high of 282,000, the movement has remained in the headlines, largely over disorder by a handful of violent protesters along the Champs-Elysees.

Following a particularly violent demo in March, the government sacked the Paris police chief and adopted a "zero-tolerance" approach, later passing an "anti-rioter" bill granting greater powers to the security forces, which included making it a criminal offence to wear a mask at a protest.

France's powerful labour unions are also hoping to use the traditional May Day march for workers' rights to raise their profile after finding themselves sidelined for months by the grass-roots yellow vest movement.

But their efforts to join forces to secure better living conditions and improved spending power have so far been rejected by many yellow vest leaders.