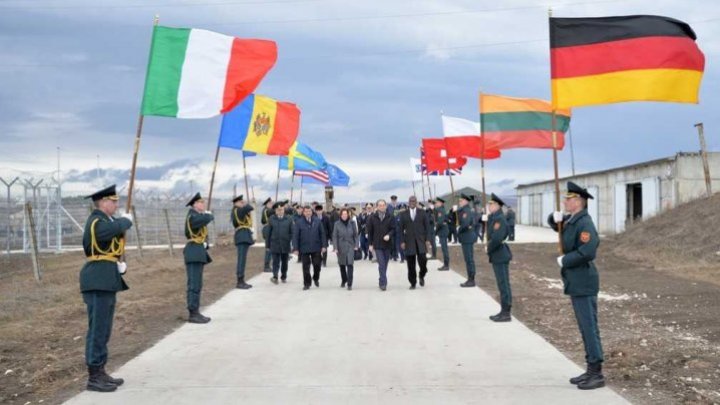 Ministry of Defense has evaluated projects aimed to improve management of stockpiles of weapons and ammunition in National Army, supported by foreign partners, in a meeting organized in Floreşti.

The event was participated by Ambassadors and military attachés accredited in the Republic of Moldova, representatives of the OSCE Mission, the European Command of the USA, the Golden West Humanitarian Foundation in Germany, the International Committee of the Red Cross (ICRC) and the local public authorities.

Officials appreciated the achievements in the field of modernization and securing of weapons and ammunition depots in line with international safety standards.

Also, the officials analyzed the project aimed to renovate and secure ammunition depots at the Military Weapons and Heritage Preservation Base in Floresti, which is to be completed in 2020.

In this regard, the officials carried out an inspection visit to the respective warehouses to document the work.

The Minister of Defense thanked foreign partners for the constant and significant support to modernize and secure the National Army's ammunition and ammunition depots.

"On behalf of the Government of the Republic of Moldova, the local population and the team I lead, I would like to express my highest respect and sincere gratitude to all international donors, countries and organizations, companies and foreign experts for their significant contribution to this program, which has as a common goal to create a safe environment for people", said Minister Sturza.

Moreover, Ambassador Angela Ganninger handed out the keys to five special technology units for the transport of dangerous materials donated to the National Army by Germany.

Angela Ganninger said that this donation is a major contribution to a safer environment for Moldovan citizens by facilitating the transport of ammunition in maximum safety.

"Securing ammunition storage and management of weapons stock remains one of the main challenges in the Republic of Moldova. That is why we want to protect the Moldovan citizens from possible explosions at the ammunition storage sites or during their transport, "said Ambassador Ganninger.

In turn, US Ambassador Dereck J. Hogan assured Floresti residents that the potential risks of explosion at ammunition depots can be prevented. Because National Army has a staff of  well-trained militants equipped with the necessary equipment in accordance with the best international practices in the field.

"The European Command of the United States of America chose the Republic of Moldova as the first beneficiary of the weapons and ammunition stockpile management program, largely due to the receptiveness and opening of the Ministry of Defense to establish effective cooperation in this area combat such threats to the population in the region, "Ambassador Hogan said.