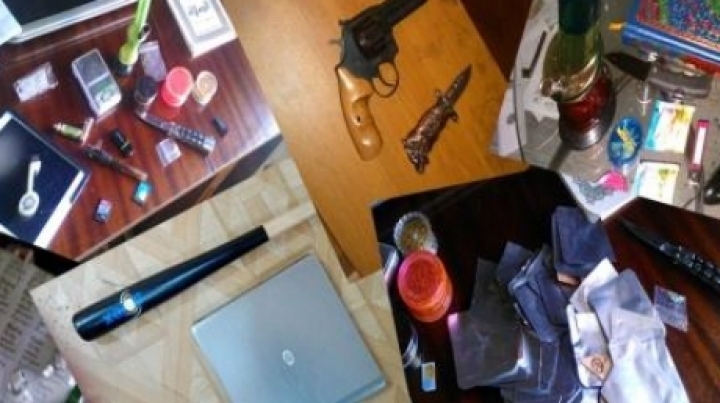 Security and Information Service, jointly with Chisinau Prosecutor’s Office, have conducted searches on three addresses where were living foreign citizens. The searches were conducted in connection to the investigation of a penal cause started on the presumption of reasonable doubt on the commission of a grave hooliganism by the citizens.

During the investigations were identified two points of packing and distribution of narcotic substances, intended only for foreign citizens. Also were seized guns, drugs and utensils for the preparation and separation of drugs.

After the verifications, it was determined that the persons show radicalization indices, being influenced by some conationals with extremist ideological options from abroad through systematic access in online environment of some propaganda materials in favor of some terrorist entities.

As a result, SIS has sent requests to Migration and Asylum Bureau of MAI in regard of some foreign persons, with the request to declare them undesirable, for nation security reasons.

At the same time, Security and Information Service, in cooperation with the Ministry of Internal Affairs, have realized raids of verification of the targeted foreigners, living in Chisinau, being identified and detained a foreign citizen, originated from an area of terrorist risk, which was illegally on the territory of Moldova. The foreigner was sent from Moldova.

The evolution of the terrorist phenomenon and the tragic events which took place in the last period have made the revision of SIS of priorities, triggering the cooperation with the institutions of guarding the national law norms, and with external partners, in order to identify and prevent the risks and threats of terrorist nature.