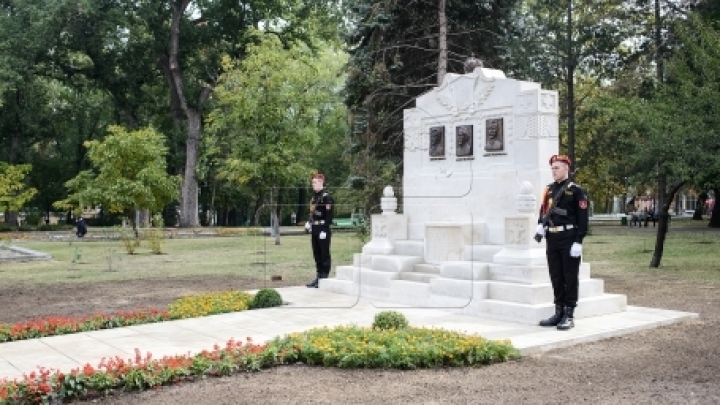 A monument dedicated to three Bessarabian (Moldovan) martyrs -- Alexei Mateevici, Simeon Murafa and Andrei Hodorogea – has reappeared in the Cathedral Square from Chisinau after six decades. The work is a replica of the monument erected in 1923, and later destroyed by the Soviets.

The sculpture has been sanctified by priests headed by the metropolitan bishop Vladimir.

The initiative to rebuild the monument belongs to the Culture Ministry, the Academy of Science and a series of municipal councilors.

"Restoring the monument to those three martyrs means our return to understanding the ones having fought for the national values in Bessarabia (Moldova)and I am glad I was part to its accomplishment," said Culture Minister Monica Babuc.

"They are the heroes of the Romanian nation. They fought for the Romanian cause and we are obliged to preserve their memory," said Liberal MP Mihai Ghimpu.

The poet Alexei Mateevici died after a severe illness on 13 August, 1917. A week later, Simeon Murafa and Andrei Hodorogea was killed by Russian Bolshevik soldiers returning from Romania to Russia.