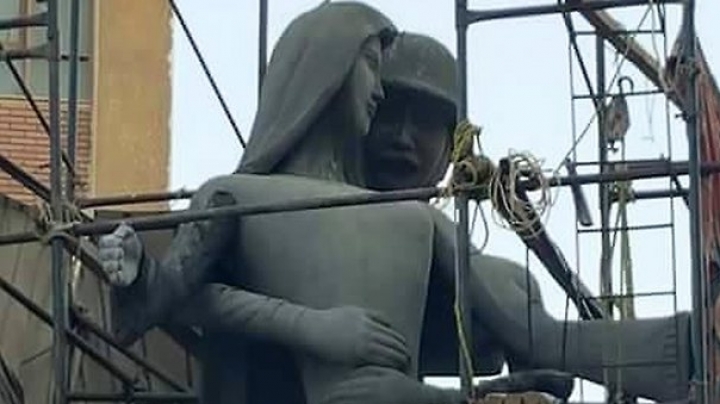 A provincial governor in Egypt has ordered changes to a sculpture honouring fallen soldiers after complaints on social media said it appeared to depict an unwanted advance on a woman meant to symbolise the country, The Guardian informs.

The concrete sculpture, titled Mother of the Martyr, depicts a slender peasant woman, a traditional artistic representation of Egypt, with her arms outstretched. A helmeted soldier is standing behind her, looking over her shoulder with his arms wrapped around her.

Residents of Sohag, where the sculpture stands at a public square in a provincial town but has not been formally unveiled, complained that it was inappropriate. Sohag and other southern provinces are more conservative than the rest of the Muslim-majority country.

The controversy over the sculpture, which made it to the national press, underlines the difficulties faced by artists and intellectuals in a country where Islamic religious conservatism has gained much ground over the past 40 to 50 years and where powerful state religious institutions frequently expound a hard-line message, despite their claims to moderation.

Some critics of the Sohag statue, which stands at 8.5m high, said in their social media comments that the sculpture portrayed sexual harassment while others interpreted it as the country’s military seducing Egypt as represented by the peasant woman. That the sculpture stood close to a girls’ school fuelled opposition.

The sculptor, Wagih Yani, 60, has begun modifying the sculpture, removing the soldier and placing an olive branch in the hands of the woman. White doves symbolizing peace will form a crescent over the woman’s head, he said.