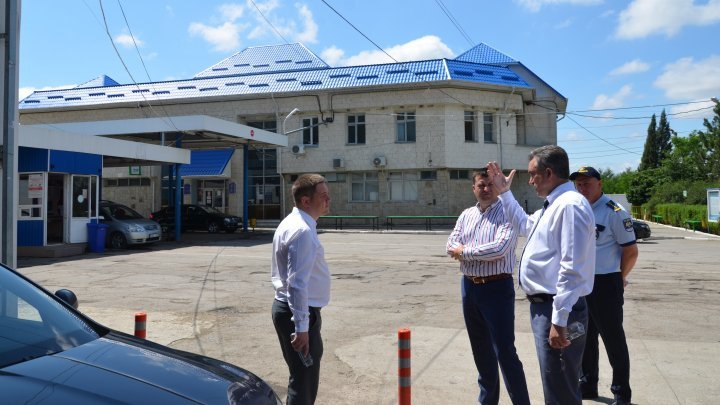 The Sculeni border customs office will remain operational throughout the reconstruction work. Customs Director Vitalie Vrabie personally went to the post to examine, together with the designers and employees of the post, the way of organizing the customs control under the conditions of a major reconstruction of the post.

The rehabilitation project was presented to the Ambassador of the European Union to the Republic of Moldova, E.S. Peter Michalko, who came to Sculeni to be informed about the planned works.

According to the project, the territory of the station will be extended by 1.3 ha, which will make it possible to supplement the control lanes and refurbish the infrastructure elements.

We would like to mention that the extension and modernization of the Sculeni customs station is foreseen in the rehabilitation project of the crossing points on the Moldovan-Romanian border section Sculeni-Sculeni, Leuseni-Albita and Giurgiulesti-Galati. The project is to be implemented under the EU-funded Joint Operational Program Romania - Moldova 2014-2020. The budget of the project is 10 million euros, of which 5 million are destined for the Republic of Moldova.

"Given that the biggest infrastructure constraints we have at Sculeni, 70% of the funds destined for the Moldovan side will be directed to the reconstruction of this post. Both in the exit and entrance of the country, we will have 3 arteries for cars, 2 for trucks and one for coaches. If at the border with Ukraine, the most modern post will be Palanca, then at the border with Romania, it will become Sculeni, "explained Vitalie Vrabie.

The European Union ambassador reiterated that the European Union will continue to support projects that assist citizens, while appreciating the efforts made by the Customs Service to ensure the functionality of the post during rehabilitation works.

"Our priority is the convenience of the citizens, in order for them to benefit from an operative control and spend as little time as possible in the customs, even during the reconstruction period. This is why we are looking for solutions to ensure job functionality. At the first stage, all the control formalities will be concentrated in the area where the slopes are located on the way of entering the country and those for the trucks.

We have already done the necessary measurements and identified the possibility of building two additional runways. At the same time, by the end of this year, we will completely eliminate automation stops by building a new customs control area about 200 m away from the post. This solution has fully demonstrated its viability at Otaci, which is why I have the certainty that it will be efficient both for Sculeni and the other two stations in Giurgiulesti and Costesti, "said Vitalie Vrabie.

At present, the Sculeni customs station records some of the highest traffic values, being crossed daily by about 2,000 transport units, of which up to 350 are trucks. Once the upgraded station has been put into service, its processing capacity will double.