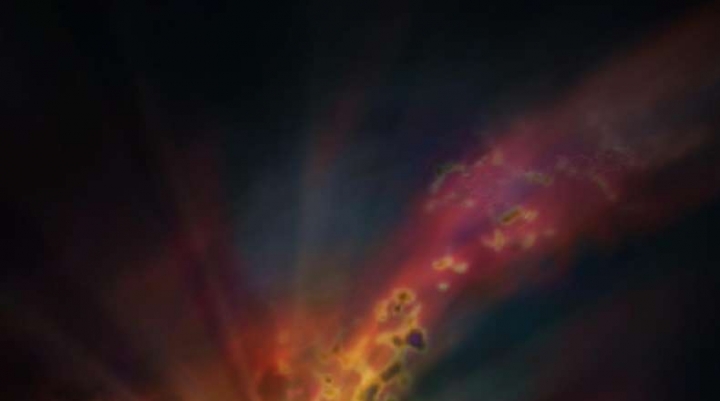 For the first time, astronomers have detected billowy clouds of cold, clumpy gas streaming toward a black hole, at the center of a massive galaxy cluster. The clouds are traveling at speeds of up to 355 kilometers per second—that's almost 800,000 miles per hour—and may be only 150 light years away from its edge, almost certain to fall into the black hole, feeding its bottomless well.

The observations, which will be published in the journal Nature, represent the first direct evidence to support the hypothesis that black holes feed on clouds of cold gas.
The results also suggest that fueling a black hole—a process known as accretion—is a whole lot messier than scientists had once thought.

"The simple model of black hole accretion consists of a black hole surrounded by a sphere of hot gas, and that gas accretes smoothly onto the black hole, and everything's simple, mathematically," says Michael McDonald, assistant professor of physics in MIT's Kavli Institute for Astrophysics and Space Research.

"But this is the most compelling evidence that this process is not smooth, simple, and clean, but actually quite chaotic and clumpy."

Given the new observations, McDonald says black holes probably have two ways of feeding: For most of the time, they may slowly graze on a steady diet of diffuse hot gas. Once in a while, they may quickly gobble up clumps of cold gas as it comes nearby.